Melinda Swan, Ahousaht's deputy chief councillor, has oversight of the First Nation's food bank. Ahousaht and the Ditidaht First Nation are coordinating mass grocery deliveries to their communities to reduce the risk of residents bringing in the coronavirus. (Anne Atleo photo)

Anne Atleo has some increased responsibilities during the COVID-19 pandemic.

Yet Atleo, the manager of administration for Ahousaht First Nation, didn’t mind taking some time out of her busy schedule on Wednesday to take part in a webinar. Atleo was one of the three panelists for a webinar titled Food Security During A Pandemic. The webinar, which lasted just under 50 minutes, was presented by the First Nations Public Service Secretariat (FNPSS). The event was also part of FNPSS’s Mentorship Network. A variety of topics were discussed, notably how some First Nations have begun coordinating mass grocery deliveries to remote communities to limit the need for residents to travel in and out.

Almost 120 people from across Canada tuned in for the webinar. Though the majority of viewers were from British Columbia, individuals from Alberta, Ontario, New Brunswick and Yukon also took part.

Jeneen Hunt, the administrator of Ditidaht First Nation, and Milica Nauman, who works for Indigenous Services Canada, were the two other panelists.

After hearing presentations from the panelists, viewers had an opportunity to ask questions and receive answers.

Atleo was more than happy to be part of the webinar to discuss what her First Nation has been doing for its members during the pandemic.

“The more people that are able to see some of the successes we might have had, that’s part of the goal,” she said.

Both Ahousaht and Ditidaht have been providing their members with weekly food deliveries via funds available through federal funding. Atleo and Hunt discussed the successes and challenges that their Nuu-chah-nulth First Nations have encountered during this process of ordering and delivering food to their members.

Atleo said Ahousaht members started being in lockdown on March 13 and were told they could only leave their village for essential travel. As a result, First Nation officials figured out a method to order bulk food weekly and have it delivered by barge for its members. This eliminates the need to have members make their own lengthy way into a community such as Tofino to buy their food.

Atleo said the food delivery process has not been problem-free.

“There’s always a challenge of having enough volunteers (to deliver the food after it arrives) and doing it in the parameters of food safety,” she said.

Atleo said a similar order is placed every week consisting of essentials, including items such as milk, eggs, bread and potatoes. These items are provided for free for members of the First Nation. Atleo added those members looking for other specific food items can also place an order through the First Nation but they will need to pay for those goods.

Hunt said one of the difficulties for Ditidaht members is that they end up receiving the same order.

“The hardest thing has been that you end up getting the same things every week,” she said.

Like Atleo, Hunt was also more than willing to take part in the webinar as she believes information sharing is crucial.

“It’s really nice to be able to do that,” she said.

Hunt said when her First Nation began its food security for members there were some early challenges.

“The toughest part was setting up our emergency operations centre,” she said. “None of our staff had incident command system training. The province uses that for emergencies.”

Hunt added although her First Nation primarily provides some of the essential foods for its members, it does make some exceptions.

“We try to get anything we can for our elders or the ones with little ones,” she said.

During the webinar advice was also given to those looking to harvest their own food in their gardens.

“There’s nothing like fresh vegetables and fresh berries,” Atleo said.

Other Indigenous communities have also been offering support for their members during the pandemic with offers of food.

“Some communities gave out one-time funding to their members,” Hunt said. “Our reason for doing the weekly distribution is that it was helping people stay home as much as possible.”

Both Ahousaht and Ditidaht have also been able to provide food for some of their off-reserve members.

“That has been a difficult one to deal with because we have more people living off reserve than we do on reserve,” Hunt said. “We’ve been able to get one-time gift cards to them. And (for those that need it) we’re recommending they go to food banks for their other sources.”

Wednesday’s webinar was the third in a series.

FNPSS’s first webinar, held May 6, was titled Working Remotely With Staff. A May 13 webinar called Communicating With Members During COVID-19 was then held. Virtual Engagement and Decision Making will be the next seminar on May 27. That will be followed by June 3 event called Reconciliation in a Time of Uncertainty.

More information or the previous recordings of webinars is available at https://fnps.ca/webinars 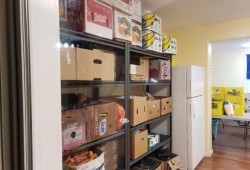