At about 7 a.m. this morning a car crashed into a hydro pole by Highway 4 on the Tseshaht First Nation reserve, according to witnesses. (Richard Sam photo)

An early morning accident along Highway 4 on Watty’s Hill has closed that portion of the highway for nearly three hours. Traffic was detoured around the scene.

According to Richard Sam, who lives directly across from the accident scene, he heard a big bang at about 7 a.m.

“At first I thought it was a bear on my porch,” said Sam.

Then he saw a blue flash go across his television screen and knew immediately that whatever happened had to do with electricity.

“I saw a truck pull in my driveway and that’s when I saw the car and the pole across the street,” said Sam.

The man that pulled into his driveway was on the phone with 911 and asked Richard to go to the man in the wrecked car.

“The power lines were down and I think he knew he had to stay in there,” said Sam of victim. “He was moving around and on the phone.”

BC Hydro reports that there is a power outage in Port Alberni affecting 134 customers. The cause of the outage is a motor vehicle accident that occurred at 6:58 a.m. today (May 25).

Sam said the driver of the vehicle remained inside the car while the Port Alberni Fire Department and BC Hydro crews secured the scene. Once power to the lines were cut, Sam said a member of the fire department opened the car door and the driver got out and walked to the waiting ambulance.

BC Hydro estimates the road will fully open at 12:30 p.m. after they install a new pole. 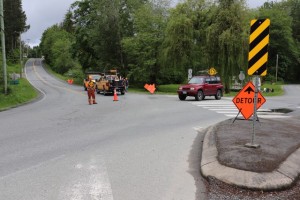 BC Hydro reports that there is a power outage in Port Alberni affecting 134 customers. The cause of the outage is a motor vehicle accident that occurred at 6:58 a.m. today. (Denise Titian photos) 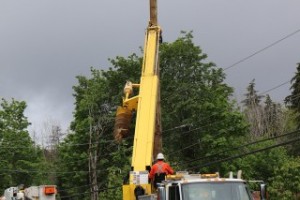