Old-growth clear cuts are pictured in the Caycuse watershed, which is located in Ditidaht territory on southern Vancouver Island. After months of public consultation, the Old Growth Strategic Review is now in the government’s hands. (TJ Watt photo)

Over the coming months the provincial government is tasked with weighing a growing public concern to protect B.C.’s oldest trees against the needs of an industry that continues to rely on old-growth logging to sustain jobs and profits.

On April 30 recommendations from the Old Growth Strategic Review were submitted to Doug Donaldson, minister of Forests, Lands and Natural Resource Operations. In October the province assembled an independent, two-person panel of forestry experts to collect feedback from communities across British Columbia on how to best manage trees that date back to before the advent of industrial logging in the 1800s.

This report will become publicly available once the minister replies to the recommendations, a process that could take up to six months, according to the Ministry of Forests’ communications department.

The Old Growth Strategic Review panel ventured to Vancouver Island, where it consulted with Nuu-chah-nulth members. In the past the Nuu-chah-nulth Tribal Council has stressed that the province should take stronger measures to limit harvesting of old growth, particularly Western red cedar trees that stand as cultural pillars in Nuu-chah-nulth life. In November 2018 the NTC called on the province to “work with them in slowing down, or even stopping the rapid disappearance of old growth forests within Nuu-chah-nulth territories.”

“The forests are vanishing with the permission of the province, and have been further endangered by the rampant B.C. forest fires,” continued the NTC statement. “Joint management through Indigenous laws, B.C. laws and other workable mechanisms is critical in curtailing further damage.”

But according BC Timber Sales, the provincial agency that auctions off sections of Crown land for harvest, logging old growth is necessary to support an industry that thousands of families rely on. Each year approximately half of the timber on the coast auctioned for harvest is old growth.

“This is what the timber supply, economic base and community employment across the coast is based on,” stated a BCTS spokesperson in an email sent to Ha-Shilth-Sa last year.

Meanwhile the Forest Practices Board continues with a review of logging in the Nahmint Valley, an area of Nuu-chah-nulth territory located south of Sproat Lake. The watchdog agency’s review was launched in response to public complaints about old growth forestry practices on this area of Crown land, which is set to have another 490,000 cubic metres of timber auctioned for harvest this spring.

This continued logging has gone against the Nahmint Valley’s designation as a “special management zone” in the Vancouver Island Land Use Plan, according to an investigation by the province’s Compliance Enforcement Branch.

“Our assessment suggests that the Nahmint demonstrates failure of professional reliance at maintaining publicly agreed upon values and priorities,” concluded the branch’s report.

The province will likely be careful to impose any restrictions to current forestry practices that arise as a result of the Old Growth Strategic Review, based on recent measures to promote the continuation of harvesting. During the COVID-19 pandemic forestry has been declared an essential service, and the provincial government is deffering stumpage, which are the fees it charges logging companies to cut stands on Crown land.

“As government, we had already taken a number of steps to help forest communities and the industry because they were facing tough times even before the COVID-19 crisis came along,” said Premier John Horgan in a government statement on April 30. “Now, we’re deferring stumpage fees so companies can maintain their financial liquidity, which will not only benefit them, but ideally, forest workers and communities as well.”

In July last year the province announced the protection of 54 ancient trees that remain on Crown land. These trees are listed in the Big Tree Registry, a University of British Columbia compilation of massive old growth stands that meet certain specifications for their remarkable size and age. These trees are to be surrounded by a one-hectare buffer zone for their protection. At least eight of these trees stand in Nuu-cha-nulth territory.

“These trees represent an important part of B.C.’s natural heritage, and British Columbians have said they want them preserved,” stated Minister Donaldson in July 2019. “What we are announcing today is the start of a broader conservation about the future of old-growth management in this province.”

Yet old-growth logging has clearly continued in parts of Nuu-chah-nulth territory that do not include these protected trees. In May the Ancient Forest Alliance publicized the cutting of massive stands in the Caycuse River watershed, which is east of Nitinaht Lake in the territory of the Ditidaht First Nation. Western red cedars are among the trees in this grove of Crown land that were recently cut. 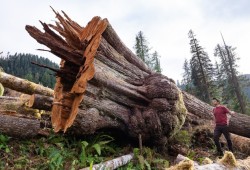