Eagle feathers used by Port Alberni RCMP to give strength, courage to the public

Striving to build trust and strengthen relationships between the police and Indigenous people, the Port Alberni RCMP is using eagle feathers to give those in need courage and strength when speaking with authorities.

The Eagle Feather Protocol is a collaboration between the Nuu-chah-nulth Tribal Council’s Quu’asa program, School District 70 and the Port Alberni RCMP. The initiative began about a year ago when Grade 5 to 7 students gleamed feathers from bald eagles that were provided by the BC Conservation Service, who located eagles that died through accidental or natural means.

The eagle teachings took place at the Tseshaht Longhouse for students to learn about Nuu-chah-nulth culture. After a week of teachings, SD70 gifted 12 eagle feathers to the Port Alberni RCMP detachment to be used by witnesses and individuals needing strength and courage to speak to officers.

The Eagle Feather Protocol started in Nova Scotia and has spread to several provinces where it’s used in legal situations. When the feather protocol arrived in British Columbia, politicians and lawyers faced the challenge of having a large and diverse range of Indigenous cultural beliefs about the bald eagle. In Nova Scotia, New Brunswick, Saskatchewan and Alberta, Indigenous culture around the bald eagle is fairly consistent, unlike in B.C. Therefore, the protocol has been very slow to adapt in British Columbia, according to Port Alberni RCMP Const. Pete Batt.

In Port Alberni, the beliefs around the bald eagle are fairly consistent within Nuu-chah-nulth communities, families and nations. The feathers of the eagle represent courage and strength.

“Our local nations have asked that we adopt the feather on a much simpler basis than what has been used elsewhere,” said Batt during a ceremony at the Quu’asa building on June 5. “We were asked to use the feather in the same way that our Nuu-chah-nulth students use them in our schools—a symbol of courage and strength, to hold when students find it difficult to speak.”

During the ceremony, Joseph Tom, senior culture worker with the Quu’asa program, blessed the feathers and prayed before handing them over to the RCMP.

Batt said the eagle feather protocol wasn’t a knee-jerk reaction to address recent police brutality against people of colour in the United States - or the killing of Nuu-chah-nulth’s Chantel Moore by the Edmunston Police force in New Brunswick on June 4 - but that the ceremony was put on hold due to COVID-19.

Ironically, the ceremony was interrupted by an Indigenous man who pulled up next to the Quu’asa building and yelled “racist cops” out the window of his vehicle.

“I think it’s very pertinent that someone came along and said what he said during the whole thing, because this is exactly the opposite of what we’re trying to accomplish,” Batt said.

Batt said there’s been a spike in mental health-related issues in the community since the COVID-19 pandemic began in mid March, and that people are having trouble feeling at ease. He said the feathers can be used as a tool to help in troubling situations.

“Each watch will have a feather that they will take care of…and they will simply lay it out in front of the client on the table where we do the interview,” Batt said. “If it’s someone who’s raised in the culture and knows about the feather, it’s a very organic thing, they will just pick it up and it’s a comfort for them, it’s strength to deal with something.”

Each feather is in a folder with a card that states the purpose of the feather is to be offered to a person to hold and to give strength and courage while speaking to police.

On the outside of the feather folders, there are RCMP brass buttons that came from Batt’s late father’s uniforms.

“My father was an RCMP member who faced many challenges when working with Indigenous clients,” Batt said. “He saw Indian reserves that had been guaranteed to First Nations in years past taken away from them in the name of industry and economic development.”

Batt said his father learned that First Nations people wanted to be heard and didn’t hold grudges against those who listened to them.

“Dad told me and my siblings stories like this as we grew up so that we would understand that we needed to communicate with people to understand their situations,” Batt said. “These feathers are meant to help facilitate communication. The feather helps our clients speak. Dad’s brass buttons are a reminder for us, as police officers, to listen.”

Peggy Tatoosh, SD70 Indigenous Education team member, said the Eagle Feather Protocol couldn’t come at a better time, as there is so much public turmoil towards police right now.

“A lot of our fellow human beings think nothing is being listened to, nothing is being done…I argue that behind the scenes there are people that are listening and they’re trying,” she said. “I appreciate the respect that’s being shown within our Nuu-chah-nulth territories…by using something cultural.”

“I have some of my own family that are on the street, that are drug addicts, alcoholics,” added Tatoosh. “[W]hen I work hard as a mama bear to help them I usually help them with something cultural, so this is good work but there’s lots more work to be done.” 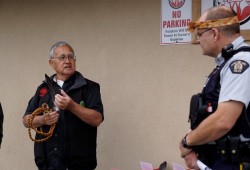 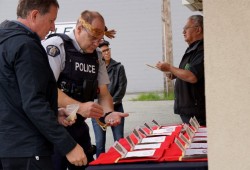