Cermaq begins testing a semi-closed containment system (SCCS) at its Millar Channel fish farm this fall, though hereditary chiefs are not convinced the new technology will protect wild salmon.

Manufactured in Norway, the system is being assembled at Canadian Maritime Engineering’s yard at Canal Beach in Port Alberni. From there, the SCCS will be towed by barge to Millar Channel and stocked with Atlantic salmon in November.

“After years of planning and co-ordination, and in co-operation with the Ahousaht Nation leadership and Cermaq Global, we are excited to have commenced assembly,” said David Kiemele, managing director of the company’s Canadian operations.

Cermaq said testing of the system in Norway has so far yielded better fish growth and health together with reduced mortality. A second-generation SCCS trial has been free of sea lice.

“We like to think of the company finding a way to hone our craft and to do things better,” Kiemele said.

SCCS allows for greater precision in farming by providing increased oversight of the internal environment, allowing control of water temperature and dissolved oxygen. The cage or pen is enclosed in a giant bag. Seawater is pumped from deeper in the water column to limit introduction of sea lice and algae.

However, the company isn’t yet touting the technology as an alternative to conventional open net pen fish farming, which is expected to transition to fully closed containment within five years to address concerns about harmful impacts on wild salmon.

“The one thing we do need is time,” Kiemele said, referring to the trial. The SCCS may prove to be a companion to existing systems and farming techniques, the company said. One of the challenges is the expense of rearing Atlantic salmon in semi-closed containment, five times the cost of conventional fish farming.

“This evaluation is a key component as we assess the technology for future use in British Columbia,” said Linda Sams, sustainable development director for Cermaq Canada.”

While fish farms have been economically beneficial to the community, the people of Ahousaht have said they want them removed, said John Caton, executive director of the Heriditary Chiefs Economic Development Corporation.

“At this point in time, we’re encouraging Cermaq to be able to go to closed containment by 2025,” Caton said. “This is 2020 and they’ve got a few years to prove this new technology.”

He noted that the system has been tested in Norway since 2017 with encouraging results but does have its limitations.

“We’re skeptical that they are going to find a complete solution by 2025,” Caton said.

Mack Bartlett, research co-ordinator with Cedar Coast Research Station on Vargas Island, said he is curious to see how the new technology works but questions its effectiveness in managing problems associated with open net pens. Only closed containment can do that.

“This kind of seems like a stop-gap,” Bartlett said. “This will not get them to that.”

The research station has stepped up its monitoring of juvenile salmon migrating through Clayoquot Sound after last summer’s sea lice outbreaks. Sea lice reduce marine survival of juvenile salmon, which lack the immunity and size to tolerate the parasite at “fatal loads.”

SSCS may be capable of controlling sea lice and algae but it won’t screen viruses, Bartlett said.

“I think, yes, it is incredibly important for them to clean up their act and closed containment may be the only way they can do it,” he said.

Bartlett said “compounding variables” have contributed to the decline of wild salmon stocks on the west coast, not only fish farm impacts but multiple stressors, including environmental and habitat changes. That doesn’t mean fish farms can be overlooked, though.

“This is a problem we can do something about if we’re trying to give stocks a fighting chance,” Bartlett said.

Dan Lewis of Clayoquot Action, an environmental group long opposed to marine-based fish farming, sees the removal of farms from the sound in much the same light. The group published a report last winter claiming that the Norwegian fish farm virus PRV-1a was found in 10 of 11 Cermaq sites tested in Clayoquot Sound. He doesn’t see SCCS as a viable option.

“I don’t see it as a stop-gap; I see it as a stalling measure,” Lewis said. “Overall, we’re alarmed — we’re very alarmed — and we know this is no solution to the problem. It’s like trying to stop pregnancy by handing out leaky condoms.”

Lewis said SCCS requires significantly more energy to power the necessary pumping, power that would have to come from diesel generators. He has additional concerns about handling of fish waste, especially if densities are increased to offset the system’s greater cost. He wondered if a federal subsidy is behind the Cermaq trial.

Sams confirmed that the company has obtained a federal Clean Energy Fund incentive that will cover 15 to 20 per cent of its investment in the project.

Cermaq management is cognizant of concerns over fish farm impacts on wild salmon, but feels the company has a responsibility to explore alternatives to removing aquaculture from the ocean.

“I think what working on this system might demonstrate to people is that we all share the same interest,” Sams said. 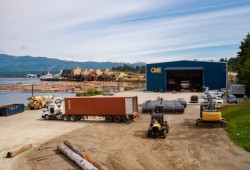 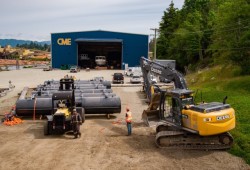