Elmer Frank works as the skipper of his boat while troll fishing in Tlookchitah and Portland Point, near Tofino.

A thick fog engulfed the coast as Elmer Frank drove his commercial fishing boat out of the Tofino harbour.

His expectations were low. A 7.8 magnitude earthquake had struck off the southern Alaskan coast late the night before.

“Fish get spooked after an earthquake,” he said.

Undeterred, Frank continued west in search of chinook salmon and halibut, which opened to the T’aaq-wiihak Fisheries on July 15.

Alongside his deckhands, Frank stayed close to Tofino, where the fish are smaller and subsequently more affordable. It was his way of trying to provide for the local community.

“It’s much more rewarding to give it to someone you know,” said deckhand, Terry Crosina, who has been fishing with Frank since 2012.

Over the years, Frank noticed that the T’aaq-wiihak Fisheries had “lost some steam.”

Some found the fishery unsustainable and became discouraged by the low numbers of allowable catch set by the Department of Fisheries and Oceans Canada (DFO). This year, the chinook salmon allocation for the T’aaq-wiihak fishery is 7,724 pieces of chinook.

Others became fed up with the short fish openings and market price fluctuations, described Frank.

In response to the changing industry, Frank has tailored his marketing to engage in dialogue with potential buyers over social media, making his fish more accessible.

Instead of specializing in one species, Frank became a Jack-of-all-trades – fishing for crabs, prawns, halibut, salmon and lingcod.

With the opening of each fishery, he re-equips his boat to target each species.

Frank got his start as a commercial fisherman in 2010 from the back of his speedboat. It’s a skill that was passed down from his late-father, Shorty, which he’s been honing his entire life.

Throughout his lifetime, the industry has experienced some big transformations. Of the thirteen wild Fraser River chinook salmon populations assessed by the Committee on the Status of Endangered Wildlife in Canada, only one is not at risk, according to the DFO.

With the declining fish stocks and hefty initial financial investment, most youth are opting to pursue more stable career paths.

“I have two sons and they want to fish, but they only want to fish on their days off,” said Frank. “They have their day-time jobs and I think they’re looking at those as more secure for them.”

Laurence Curley is a rarity. The 17-year-old said he is one of the few youth within Tla-o-qui-aht First Nation who can’t imagine working as anything but a commercial fisherman.

After insistently asking Frank to work as a deckhand, Curley was brought onboard for his first season at the beginning of June.

“It’s encouraging to see that I can pass on what knowledge I have about this industry,” said Frank. “We all come from bloodlines of fishing. Those are still the things we need to uphold and uplift.”

For Crosina, there’s nothing like being out on the water.

Hailing from Esketemc First Nation, near Williams Lake, he moved to the coast to be able to fish on the open ocean.

While the work doesn't afford him luxuries like holidays or being able to spoil his children, he takes comfort knowing that “they prefer to have a salmon on the table,” he said.

As the morning turned to afternoon, Frank had given up. Just like he predicted, the earthquake had seemingly scared off the fish. He made the call and the crew began to pack it in. They had only caught three fish – one lingcod, one chinook salmon and one coho salmon.

It was the slowest day of fishing Frank had ever seen for that time of year.

“It’s probably days like this that make people lose interest,” he said.

But as he pulled back into the harbour, the crew plotted their next trip up to Esperanza, where they would soon be heading. 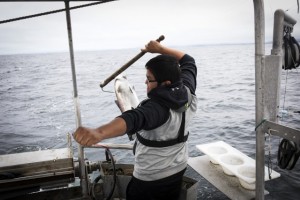 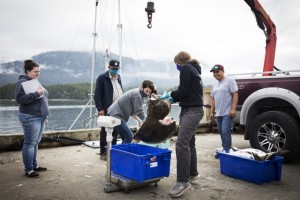