Hughie Clarke in front of his store in Ahousaht. (Curt McLeod photos)

He has been there for as long as most Ahousaht residents remember so it came as a shock to learn that the long-time resident owner of Ahousaht General Store, Hugh Clarke passed away on the morning of July 21.

Hugh Clarke was born Dec. 4, 1936 to Ivan and Mabel Clarke. His family has a long history in Clayoquot Sound beginning in 1933 when Ivan began building on pre-empted land in Hot Springs Cove.

Pre-emption was a method by which colonial or provincial Crown land in British Columbia could be acquired by claiming it for settlement. It was designed to encourage settlement in remote areas of the province.

Then known as Refuge Cove, Ivan built a home and general store, moving his growing family to the cove. He expanded his business and operated the first post office in Hot Springs Cove.

According to Michael Kaehn’s book, The Hot Springs Cove Story, Ivan Clarke, who was Kaehn’s grandfather, helped Hugh Clarke purchase the land and assets that make up Ahousaht General Store. It started out as a branch of Ivan’s general store in Hot Springs Cove.

“Ivan had helped arrange the purchase for Hugh of the store, all the outbuildings and 12 acres of property in Ahousaht for $25,000 in 1958, from his very good friend Gordon Gibson Sr…,” wrote Kaehn in his book.

“Hugh was about eight years old when he borrowed a seine skiff from the Campbells to start fishing in Hot Springs Cove,” Kaehn writes.

According to Kaehn, Hugh quit school in grade 9. By that time, he had already been building boats, fishing outside the cove and selling his catch at his father’s fish camp. He built a troller that he used to travel from Ahousaht to visit Maggie who was working as a nurse at Tofino General Hospital.

Hugh and Maggie were married in Ahousaht on Nov. 20, 1964. They raised their three children, Keith, Iris and Stephen at their property in Ahousaht.

Following in his father’s footsteps, Hugh launched his own general store in Matilda Inlet that eventually expanded to offer postal services, marine fuel service, a motel and hostel and even a restaurant.

Hugh and Maggie’s daughter Iris married and moved to Tofino where she took on the job of Tofino Post Master. In later years, Hugh’s granddaughter Shelby took over mail service in Ahousaht after he suffered a stroke; making four generations of Clarkes that worked in postal services in Clayoquot Sound.

Hugh Clarke was predeceased by his wife Maggie and son Stephen. He will be lovingly missed by his daughter Iris and son Keith, along with his sister Patsy (and Peter) Moseley, sister in-laws Gloria Clarke, Julia Eaton, Nora Simpson, his grandchildren, nieces and nephews.

He will also be missed by his lifelong friend Louie Frank Sr., Kalle and Alec Erickson and many more.

“There is so much more on Hugh’s life, you could write many books,” said the Clarke family.

Hugh was remembered at a memorial service held in Tofino on July 25. The family held a private service in Ahousaht in early August.

Rebecca Martin continues to run the Canada Post services in Ahousaht while other family members run the general store. 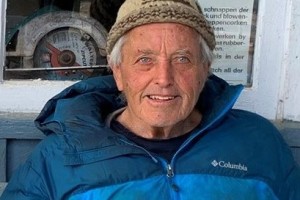