Tseshaht protest before DFO office after no agreement made for chinook

Ed Ross sings with other Tseshaht members before the Fisheries and Oceans Canada office in Port Alberni during a protest held due to no agreement for the First Nation to catch and sell chinook from the Somass River. (Eric Plummer photos)

After leaving a meeting in frustration over the inability to get an agreement from DFO, Tseshaht members protested in front of the federal department’s Port Alberni office today – with some stating that the First Nation will fish anyway while chinook are still passing through the Tseshaht’s home river.

“We need an income this year,” said Martin Watts, part of Tseshaht’s negotiation team, noting that some of the First Nation’s boats could catch as much as $40,000 from the chinook run. “There is plenty of fish out there to allow it to open.”

Fisheries and Oceans Canada allocated 18,000 chinook to the Tseshaht and Hupacasath First Nations, said Watts, 2,000 of which has already been caught since the fishery began in the last week of August. He added that the seine and gillnet commercial groups have also been allotted 18,000, but their boats have already caught a combined total of 28,000 chinook from the Alberni Inlet, which the Somass River flows into. The busy recreational fishery is expected to catch another 28,000-29,000 chinook, said Watts.

Many Tseshaht members have taken loans from the Nuu-chah-nulth Economic Development Corporation to invest in fishing boats and gear – and the absence of an agreement with DFO that allows the First Nation’s members to sell to commercial buyers could become problematic.

“If we don’t get an income from this fishery, where does that leave us? Do they want us all to file bankruptcy?” asked Watts, noting that clashes with the federal department are a concern due to the number of DFO vessels on the water when the First Nation’s chinook fishery opened in late August. “Explain to me why they had full force out when we went fishing last week.”

After the Sept. 1 meeting Hugh Braker, the Tseshaht’s lead fisheries negotiator, noted that a final decision has yet to come from Fisheries and Oceans.

“At the end of the teleconference I reminded DFO that Tseshaht has already signed this year’s agreement and we are waiting for DFO to sign,” wrote Braker in an online post for members. “Linda Higgins, the area manager for DFO, said they need more time to discuss the matter internally.”

This breakdown in negotiations presents a continuation from the sockeye fishery that took place in early July. After low early-season forecasts predicted no openings, the expected run size was upgraded in June, leading DFO to allocate 13,000 sockeye to the sports fishery while the Tseshaht and Hupacasath were allotted 20,800. But an economic opportunity agreement wasn’t made when Tseshaht didn’t agree to these numbers prescribed to its territorial river. By Canada Day the First Nation was on the water fishing sockeye anyway, following its Aboriginal right for priority access that is recognized in Canada’s Constitution, selling their catches by the side of the road.

“It angers me the fact that we can’t fish right now,” said John Gomez, who like many at the gathering grew up on the Somass. “We’re passing on that gift that we have, that gift was given to us by our grandpas, by our uncles, and everybody before us.”

“This fishery is our life, and it affects all of us – not just Tseshaht, it affects Port Alberni, it affects neighbouring communities - it affects our families most importantly,” said Ed Ross. “I’m going to be on that ramp if we don’t see an agreement. If Tseshaht isn’t in the water, nobody is going to be in the water.” 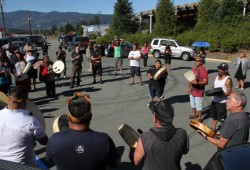 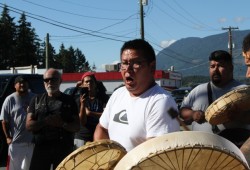 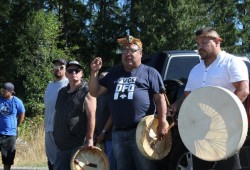 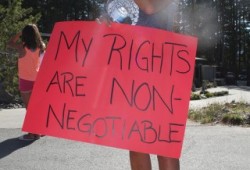