The skull of a West Coast Wool dog was found on Keith Island in 2019 during an archaeological dig. (Submitted photo)

An ancient breed of dog has been identified from a set of bones found in an archaeological dig site on Keith Island, or Kakmakimilh, in 2019.

The University of Victoria, in partnership with Tseshaht First Nation and Parks Canada, conducted an archaeological excavation on the Tseshaht Reserve of Kakmakimilh in the Broken Group Islands. Tseshaht has hosted UVic students at their Broken Group Islands during the summer since 2016, where they conduct their archeological digs. Tseshaht has partnered with UVic Archaeologist Iain McKechnie, co-director Denis St. Claire, Parks Canada, Bamfield Marine Sciences Centre and Hakai Institute.

The ancient wooly dog, also known as the West Coast Wool Dog, dates back 3,000 years and was bred by coastal indigenous peoples for its long, soft hair. This breed of dog would be shorn with sharpened mussel shells two or three times a year and its ‘wool’ would be spun and woven into textiles used for clothing, blankets and mats. The West Coast Wool dog is said to have looked like a small Akita or husky with its bushy, curled tail.

It had an undercoat that was dense, making it suitable for spinning into a yarn that would be woven into textiles. The dogs were highly valued for their hair and the luxury items that could be made from it. Blankets and rugs woven from dog hair mixed with other materials like mountain goat or fluff from plants like fireweed were prestigious gifts at potlatches.

According to Lydia Sigo, a Suquamish tribal member and the curator and archivist at the Suquamish Museum, there is a wool dog blanket at Burke Museum in Seattle. The blanket, more than 100 years old, is mostly intact with a large hole on one side.

The smaller, usually white, wool dog was kept separate from the village dogs in order to maintain the integrity of their breed and valuable coats. Evidence of the wool dog has been found in village sites along the Salish Sea on the east coast of Vancouver Island, Puget Sound and now, in Nuu-chah-nulth territories on the west coast of the island.

From analysis of the bones examined at UVic, it was determined that the Tseshaht dogs were, not surprisingly, eating significant amounts of marine fish.

“Specifically, anchovy, herring and salmon – amounting to approximately half of the food they consumed throughout their lives,” said Dylan Hillis, a UVic student who authored a research paper about the Tseshaht dog remains.

Dr. McKechnie said it is important to know what the dogs were being fed, given their cultural importance. Their diets prove that they were important to the people as they were fed especially valuable marine foods such as Pacific herring or various species of salmon and northern anchovy.

The Tseshaht wooly dog and other dog remains unearthed at the Keith Island site date back 3,000 years.

The scientists were able to prove through their research not only what the dogs ate but also how they were cared for by the Tseshaht.

“Obviously, the role that humans took was substantial since dogs were not catching these fast-moving fish on their own,” said Hillis.

According to McKechnie there is archaeological evidence that the wool dog was bred in southern Nuu-chah-nulth communities.

“[N]umerous other sites in Nuu-chah-nulth and Makah territories had small wool dogs - (Tla-o-qui-aht, Tseshaht, Huu-ay-aht, Ditidaht) such that we should expand the concept of wool dog to include not just the Coast Salish area but also southern Nuu-chah-nulth communities,” he said in an email.

He went on say that some of the earliest dogs found in archaeological sites throughout the coast are from 3,000-5,000-year-old deposits at the Ts’ishaa village site on Benson Island, an important Tseshaht origin site.

“Domestic animals were a big part of the coast, and small wool dogs were the most abundant breed on the south coast of B.C. over the past 5,000 years,” McKechnie added.

The West Coast Wool dog became extinct about 100 years ago. With the introduction of machine-made wool blankets brought in from the British Isles, the West Coast Wool dog lost its value. Tending the dogs and transforming their hair into yarn was both time consuming and labour intensive, while manufactured wool blankets could be purchased relatively cheaply with a few animal pelts.

Around 1900 the last of the pure West Coast Wool Dogs were breeding with dogs brought in by settlers, bringing them and their village dog counterparts to extinction as a distinct native dog breed.

The Broken Group Islands, isolated and mostly untouched by modern development, are a rich source of artifacts that tell thousands of years of pre-colonial history.

In 2019 a geoduck shell was unearthed in an ancient clam pit on Keith Island, proving that Tseshaht harvested and ate the geoduck. Geoduck were excluded from the 2009 Nuu-chah-nulth fisheries court case victory because there was no solid proof that they harvested geoduck. The court argued that the species have only been harvested since the invention of modern equipment and there was no evidence that First Nations collected them.

“The first is about dogs, wolves and other canids across the whole coast but including Nuu-chah-nulth territories; the other is about domestic dog diets from Tseshaht territory specifically and includes Denis St. Claire as a co-author,” he said. 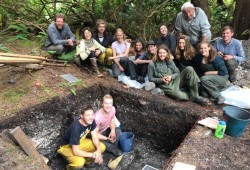 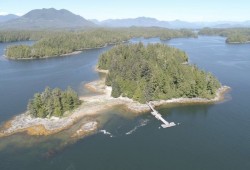 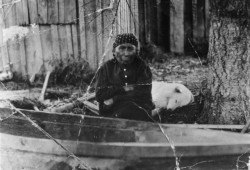