Nine years after Namgis First Nation established one of the first land-based salmon farms of its kind, Kuterra Salmon is on track to prove the technology works, says the company’s CEO.

With a 15-year lease signed in February, the north Island First Nation handed over management of its Port McNeil facility to U.S.-based Emergent Holdings LLC, a company with a major stake in the future of North American aquaculture.

At full capacity, Kuterra can produce 260 tonnes of Atlantic salmon per year but has to grow six to eight times that amount to reach profitability. Namgis went looking for new investors a few years ago, realizing they lacked the capital to take their enterprise to the next level.

“Basically, we ran out of money,” said Garry Ullstrom, who assumed the helm at Kuterra Salmon in 2011 and continues in that role. It was time to bring in a partner with deeper pockets.

Building from a capital investment of $10.5 million, the Namgis spent three to five years developing the closed containment technology known as a recirculation aquaculture system (RAS), encountering various technical challenges in the process. A partial suspension of operations two years ago allowed them to address water treatment issues and upgrades while fish production continued.

Nuu-chah-nulth nations were among early investors, providing a loan through Nuu-chah-nulth Economic Development Corporation that has since been repaid, Ullstrom said.

“West coast First Nations supported the Namgis in this very important milestone and they’re grateful,” he said. “The ripples have spread out well.”

Last year, Emergent offered to purchase a stake in Kuterra, but a first offer was rejected by Namgis council in favour of leasing. Once a deal was reached, Emergent started investing in facility equipment, Ullstrom said.

“That’s what the Namgis hoped for,” he added. “The goal has always been to prove this technology works.”

Emergent is more than an investment firm. The company owns Whole Oceans, which is building a state-of-the-art RAS facility in Bucksport, Maine. Kuterra represents a strategic asset, providing technological expertise and a West Coast foothold. The company plans to build facilities that can produce up to 10 per cent of the demand for fresh salmon in the U.S., or at least 50,000 tonnes per year, Ullstrom said.

At the same time, other companies around the world are investing heavily in the fledgling industry. Land-based salmon production has doubled this year, totaling 86 projects around the world with a capacity for 1.5 million tonnes annually. Norway’s Atlantic Sapphire is building a massive facility near Miami with the aim of supplying half of U.S. consumption by 2031.

Emergent has expansion plans for the West Coast as well.

“Emergent is also looking at funding and developing a major site, up to 50,000 metric tonnes per year in B.C., preferably on Vancouver Island,” Ullstrom said. “They hope to close a purchase of a piece of land within the next six months,” though site accessing and permitting would take an additional year.

Vancouver Island offers key advantages. Chief among them is social licence and government support, providing investors with greater assurances amid the uncertainties inherent with an industry breaking new ground. Relatively inexpensive power is another one. Energy is one-third of Kuterra’s costs and B.C.’s low-carbon hydroelectric power gets higher points for sustainability, a big plus. The Island’s climate is also advantageous, more so than in Florida, where saltwater is much warmer than an optimal 13 C for fish culture.

Moreover, B.C. has established expertise in aquaculture as well as feed mills and processors already in place. Along with its Port McNeill investment, Emergent has bought Nanaimo-based PR Aqua Engineering, the same firm that designed Kuterra.

While B.C. Salmon Farmers Association has described land-based farming as an option rather than an alternative to ocean-based farming, there is mounting public pressure on the industry to transition from marine environments. On the B.C. coast, much of that pressure comes from First Nations deeply concerned about the impact of open net pen farming on wild salmon.

There are limited places in the ocean for aquaculture and there are also increasing concerns about the capacity of marine environments to accommodate aquaculture, Ullstrom noted.

“Because of all these things, we figure there is a real opportunity to build and reach the U.S. market,” he said.

Kuterra has faced hurdles while making measured progress with the new technology.

“It’s taken three to five years for us to get the technology to work properly,” Ullstrom said. “We’re growing two crops, fish and bacteria in a biological filter.”

The operation still lacks a hatchery to complete its production cycle. As well, its well-based supply of saltwater lacks the higher salinity of seawater. To improve water quality, Kuterra is considering building a pipeline from the ocean, but that would require a million-dollar investment.

One of the primary benefits of RAS is that it can grow salmon without hormones, antibiotics or pesticides. The system enables rapid growth. At Kuterra, fish are raised from smolts to a marketable size within a year. Last week, Emergent reached a long-term agreement with Cermaq Canada for the supply of smolts for Kuterra.

The agreement extends for three years, providing Kuterra with more than a guaranteed supply.

“It’s extremely significant because without smolts Kuterra does not have a business,” Ullstrom said. “This allows us to plan ahead with certainty when stocking the facility.”

“Globally, there is no question this industry is gaining momentum,” Ullstrom added. “It’s got traction. Billions of dollars around the world are being invested in these facilities. We’re at the start of the development curve and innovations are coming continually just like they did with ocean-based farming 50 years ago.” 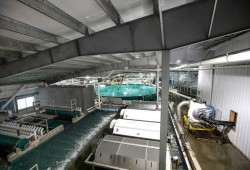 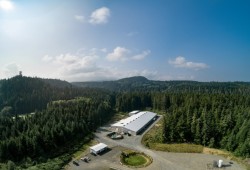