A protest has concluded against the Port Alberni Shelter Society but tents remain erected and homeless people with nowhere to go continue to gather outside the shelter on Eighth Avenue. (Karly Blats photos)

A protest that began at the Port Alberni shelter on Oct. 23 has turned into a camp for the homeless who have nowhere else to go.

The protest was started by Port Alberni’s Graham Hughes, who is calling for an investigation into a broad range of allegations against the Port Alberni Shelter Society (PASS).

Several tents remain erected on a grassy area beside the shelter on Eighth Avenue and supporters continue to visit the site to bring food, clothing and support to those now staying there.

The protest eventually dissolved because BC Housing has committed to conducting a third-party review into the allegations and concerns towards PASS.

Early on the morning of Oct. 30, Hughes was arrested for entering the shelter (Our Home on Eighth) and requesting a bed. Police were called and Hughes was taken into custody. He was charged with mischief but the charges were later dropped.

In addition to numerous allegations against the shelter society, which operates the multi-service shelter, a sobering site on Fifth Avenue and a harm reduction facility on Third Avenue, Hughes says he began protesting for justice for his sister.

Hughes’ sister Jessica died seven years ago. She was staying at the Port Alberni shelter at the time when she began experiencing a medical emergency. Hughes says shelter staff were delayed in calling an ambulance. Eventually a staff member did call an ambulance and Jessica was transferred to the ICU. She died five days later.

Hughes said an investigation into his sister’s death never happened and seven years later he only has more questions than answers.

“I asked for an investigation into (Jessica’s death) earlier this year. I got an affidavit that was actually evidence of it, but still didn’t hear anything back,” Hughes said outside the shelter on Eighth Avenue last week.

Protesters allege that shelter staff have abused their positions in working with the disadvantaged. They are also calling for a list of banned ex-shelter residents to be reviewed and the creation of an appeal process for those who are banned.

On a banned list that Hughes was given anonymously, more than 100 names are listed with reasons for being banned that range from sexual assault, violence, threatening staff and drug dealing to being unable to follow rules, clogging a shower, mental health issues or just not being welcome. Some names have “for life” beside them.

Wes Hewitt, executive director of the Port Alberni Shelter Society, said himself or the other board members aren’t able to speak to media about the protest or any of the allegations because it’s going to litigation.

He did say policies in place at the shelter are per WorkSafeBC standards for the safety of the residents and staff.

“I wish we could take everybody but we can’t,” Hewitt said. “We’re working with the city and other partners in the community to try and work something out so that those people are looked after.”

Hewitt released a letter last weekend that states the recent conversation surrounding the shelter’s operations have been “disheartening to hear as it does not accurately reflect the way in which the PASS conducts its operations.”

The letter says the PASS cannot comment publicly on confidential issues as they have contractual agreements with BC Housing and the Vancouver Island Health Authority.

“The Port Alberni Shelter Society’s values include no tolerance for insulting, abusive and threatening comments aimed at an organization or individual,” the letter states. “We aim to be a model for compassion and acceptance of everyone, regardless of their circumstances.”

The shelter provides 30 supportive housing units, 23 emergency beds, one family unit and 15 spaces during extreme weather. According to the society’s website they also offer a variety of supports and services that empower individuals towards self-sufficiency and a sense of belonging within the community.

Shelter resident Ivy Nichols said issues she’s experienced during her two years living at Our Home on Eighth include a lack of privacy, inadequate access to medical assistance and resources as well as a strict set of rules.

“They’re very strict and they kick people in and out all the time,” Nichols said.

Although Nichols feels safe living at the shelter, she believes residents aren’t getting the resources they need to be successful in life.

Resident Uttla Williams from Tseshaht has been staying at the shelter for about a month. He said he was threatened to be kicked out for washing his shoes in a sink and walking around in his socks. He also disclosed a lack of privacy and respect for personal belongings by staff members.

A former support worker with PASS, Alice Sam was working at the old shelter facility on Eighth Avenue about three years ago and is still concerned with what she saw occur there.

Sam believes some support staff with PASS are not trained properly to work with people experiencing trauma.

In a City of Port Alberni press release, Mayor Sharie Minions says the concerns expressed against the PASS have diminished confidence in the service provider in a significant way.

“We applaud BC Housing for taking a leadership role in addressing these concerns and for their ongoing commitment to providing safe, affordable and accessible housing to our community’s homeless and under-housed populations,” Minions said in the release. “In my capacity as mayor of Port Alberni I commit to remaining involved in this matter, to supporting the third-party review and to ensuring that all voices in our community have the opportunity to be heard, especially those of our vulnerable populations.”

In an emailed statement, BC Housing said they were aware of the protest at the Port Alberni shelter and are monitoring the situation.

“We are in regular contact with the Port Alberni Shelter Society and community partners. BC Housing is committed to due diligence and following up on all and any allegations and complaints.”

Cynthia Dick, chief councillor of the Tseshaht First Nation, said the Tseshaht don’t have any say on the operations at the shelter and that representation from the First Nation would be beneficial.

“Tseshaht needs to be involved more in different services that are in our territory and our main values are taking care of the people within the territory,” Dick said. “We’ve built stronger relationships with the Port Alberni Port Authority, the City of Port Alberni and the ACRD and it’s a matter of making sure that we do have voices at the table when decisions are being made that affect our community and our members.”

Dick believes what Hughes and the other supporters are asking for isn’t unreasonable.

“I think the main message that they’re looking for is transparency, accountability and making sure that all of our vulnerable people are taken care of,” she said. “[Mayor Minions] and I have also talked about other ways that we can support moving this forward in any way we can to figure out what exactly is needed.”

After protesting for a week and a half, Hughes says he thanks Port Alberni city council for pushing the BC Housing review forward, but that urgent needs for Port Alberni’s homeless population remain unmet.

“[The homeless camp] is not something that should need to remain but it tragically does need to stay until beds are opened,” Hughes said. “The need for a youth shelter keeps being highlighted by the number of youth who show up for drugs or shelter at the camp. We have nothing for them yet and it’s soul wrenching to know it’s a growing problem.”

A petition has begun to open the old shelter facility on Eighth Avenue, just down the street from Our Home on Eighth, to house the homeless who have nowhere to go.

Lisa George, homeless advocate and director of operations at Port Alberni’s New Leaf Supportive Housing, said in a letter to the City of Port Alberni and other service providers that she would like to offer her knowledge and ability to work collaboratively with any funding agencies to facilitate the services required to get hard-to-house individuals off the streets.

“I am hopeful this letter can be added to the agenda and presented at the scheduled (Port Alberni) city council meeting this upcoming week and further discussion can be scheduled with myself and some of the advocates of our homeless community,” George wrote. 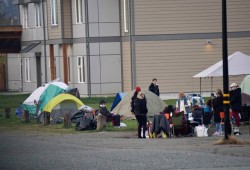 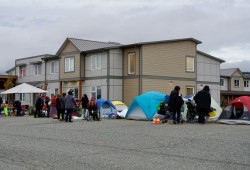 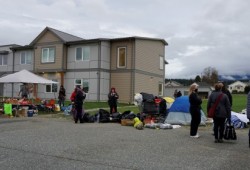 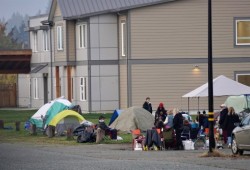