Reflective feathers given out to protect nighttime pedestrians

Vehicle collisions with pedestrians nearly double in the winter due to poor visibility, reports ICBC - particularly in Port Alberni, which has seen fatalities in recent years. Now these reflective feathers are being distributed by Teechuktl Mental Health and the RCMP to help walkers be more visible at night. (Denise Titian photos)

Lower Third and Fourth Avenues in Port Alberni bustle with activity both day and night. Now that winter is approaching and the nights are getting longer, chances of pedestrians being struck by vehicles increase dramatically.

Const. Elizabeth O’Conner of the city’s RCMP Indigenous Policing Service notes that there have been fatal vehicle collisions with pedestrians in Port Alberni over the years. A recent fatality occurred about a year ago; it involved a Nuu-chah-nulth woman crossing Third Avenue near the Safe Injection Site on a dark night when she was struck and killed.

About two weeks ago another woman, intoxicated on drugs, wandered out into the dark street at Bute and Third Avenue, very nearly getting hit.

“It was witnessed by police officers,” said O’Conner.

“It is dark this time of year, increasing the risk of vulnerable people to be struck by a vehicle,” she added, noting that there have been two hits in recent weeks with one person seriously injured.

The RCMP, in partnership with ICBC, are now offering free, clip-on, white feather reflectors. The vinyl reflectors can be clipped in jacket zippers, hats, any outside clothing, making the wearer more visible in the darkness of the night.

According to ICBC, crashes involving pedestrians nearly double this time of year, and part of the reason could be lack of visibility.

“When darker days and poor weather become part of the daily grind, it’s naturally more challenging for drivers and pedestrians to see each other,” says ICBC.

Reflectors are making a comeback and are an important tool in keeping pedestrians safe by making them more visible at night. Becki Nookemis, the NTC’s Teechuktl (Mental Health) harm reduction coordinator, received a batch of the reflective feathers from the RCMP and ICBC which she will be giving out to the people that her team serves.

Every second Tuesday the Harm Reduction Team sets up tables at the entrance to Dry Creek Park on lower Fourth Avenue where they barbeque burgers and hot dogs. But with the pandemic forcing social distancing, visitors are handed packaged food along with any of the supplies they have on hand.

Gina Amos is also on the Harm Reduction Team. She says the team hands out the food in packages along with bottled water and clean supplies, including Naloxone kits. They will also deliver Naloxone training to anyone that wants it. Naloxone reverses the effects of illicit drugs in the event of an overdose.

Const. O’Conner says that 250 feathers have been given out so far and there are many more available. The little gifts are popular and people may want to take more than one feather.

“It opens doors; when you offer a gift then you may be able to get a little chat,” said O’Conner.

People are attaching the little feathers to their jacket zipper pulls and one woman wears them as earrings. The feathers are available from the NTC Teechuktl Harm Reduction Team and the RCMP Indigenous Policing Service team members.

This December the Teechuktl team will host a feeding the people event, but with a social isolation twist.

“The Feed the People event will be very different with Covid,” said Vina Robinson, Teechuktl Manager.

This year the team is collecting clothing, food and toiletries donations as usual at their offices at the corner of Redford Street and Fourth Avenue in Port Alberni. The food will be prepared at the Alberni Athletic Hall then packaged up.

“The RCMP and the Harm Reduction Teams will deliver food to the people,” said Robinson. 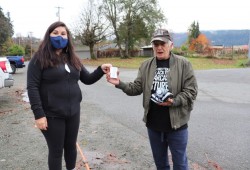 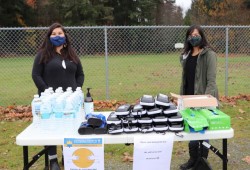