A tent settlement that has grown outside of the Port Alberni Shelter Society's facility on Eighth Avenue was taken down Nov. 13, after an eviction notice was given by Island Health, which owns the property. (Eric Plummer photos)

A third-party review looking into recent allegations against the Port Alberni Shelter Society (PASS) is now underway and is expected to take several weeks for completion.

Meanwhile, a tent settlement that gathered in protest outside of the shelter for the last few weeks was disbanded by Island Health on Nov. 13.

Graham Hughes has led the protest, and has remained at the camp since Oct. 23. He said that the tent residents were given a no-trespassing order the evening before the eviction began.

“Island Health has given us the eviction notice, but also given us some options to get people some housing for the time being,” said Hughes. “We are having funded hotel rooms, it looks like for six days while we figure out this investigation and what we can do for a longer-term placement for people.”

Hughes expects that the hotel accommodation will give people a reprieve from sleeping outdoors as cold, wet weather descends on Port Alberni.

“Last night, just with the rains that we’re having, tents are starting to float and bog down, people are getting sick from mould in sleeping bags,” he added. “For a few days they’re dry, they can have showers and get cleaned up.”

The third-party review was secured by BC Housing after the group of protestors brought forth several allegations against the shelter society and called for an investigation.

In an emailed response, BC Housing stated they are committed to following up on all concerns regarding the projects and societies that they support.

“Due to the allegations, it is important that the review be conducted at arm’s-length from BC Housing, which is why we secured a third-party contractor to conduct an independent review of the expressed concerns related to the Port Alberni Shelter Society,” states the response.

BC Housing disclosed they will not be commenting further on the review until it’s complete.

Allegations that have arose against the shelter society include staff abusing their positions in working with the disadvantaged. Advocates are also calling for a list of banned ex-shelter residents to be reviewed and the creation of an appeal process for those who are banned.

In a Nov. 3 media release Brigitte Knoll, chairperson of the board of directors for the Port Alberni Shelter Society, said the society is committed to working with BC Housing and the third-party reviewer.

“We look forward to the results of their review as we are confident that they will affirm the essential work being done here,” Knoll said in the release. “The focus of PASS remains on continuing to provide critical services to those who need us. I acknowledge and thank our community for their ongoing support.”

Hughes hopes that the development will pressure local agencies to open unused buildings for the homeless, including closed public schools.

“I feel like we’re finally gaining traction, but the horrifying thing is this is just a fraction of the whole population that isn’t getting housed,” he said at the tent settlement outside the shelter. “The closest public bathroom that is accessible to anyone is at the information centre at the entrance to town.”

Melanie (April) McCarthy lives near the shelter in Port House, a subsidized residential building run by the Canadian Mental Health Association. She came to the tent settlement to support those living there.

“I’m independent, I want to be independent, but I understand these people. I was on the streets for 32 years,” said McCarthy, who is a member of the Yuułuʔiłʔatḥ First Nation. “People have got to look at them as human beings, not just trash. There’s people here with mental health issues, and it’s not their fault. They make mistakes.”

McCarthy’s niece was living at the tent settlement, but on Nov. 13 she hadn’t seen the young woman for two days.

“My niece is out here, and she’s addicted to heroin,” said McCarthy. “She’s very smart, but she’s just messed up right now and I worry about her every day. I wait here and hope that she shows up, because when she’s here she’s safe. Out there you don’t know if she’s going to OD and go down. Is someone going to be around with a Narcan kit?”

Hughes noted that although the Island Health staff came to disband the tents, their presence led to some people getting support with addictions.

“Even just today by having the presence here, we’ve had one person signed up for Suboxone and two other people put on a detox list,” he said. “Having populations in a place where people can reach them, allows them to have those options for transfer to services that we don’t have here.”

Advocates in the community are proposing the old shelter facility, just down the road from Our Home on Eighth, be opened temporarily until a more permanent housing solution comes to fruition.

Lisa George, homeless advocate and operator of the New Leaf Supportive Housing, said in a letter to Port Alberni city council and other stakeholders that it has been petitioned as a solution to reopen the old shelter site to house the vulnerable individuals living in the tent city community outside Our Home on Eighth.

“If the old shelter site, offering up to the 48 existing beds could be accessed or any other appropriate facility for that matter, I would like to offer my knowledge and ability to work collaboratively with any and or all funding agencies such as but not limited to the City of Port Alberni, BC Housing, Island Health, First Nations Health Authority, Local Band offices etc. to facilitate the services required to get these individuals off the streets and accessing their basic needs,” George said in her letter. “Organizing volunteers, staffing models, grants, funding options, food service and day-to-day site operations are within our organization’s capacity. Insurances, registrations, licenses and legalities will be a challenge to obtain when the urgency is in the forefront, concessions may need to be discussed.”

Wes Hewitt, PASS executive director, said the former shelter site has been opened by BC Housing for the past year for overflow when the new shelter facility is at full capacity.

“[The former shelter] has been open at different points throughout the year but it’s only open, it’s only set up and staffed at 5 p.m. if we have over the capacity at the new [shelter],” Hewitt said. “When the main shelter is full, it opens up for 12 beds…12 spaces is what it’s funded for.”

Hewitt said BC Housing only provides funding for 12 beds because that’s what they figured maximum capacity would be. He said they’ve never had a need for 48 beds.

Hewitt said he doesn’t know whether the individuals camping outside the new shelter site are banned from staying at the shelter or not. He also couldn’t provide comment on the third-party review.

At a Nov. 9 Port Alberni city council meeting, mayor Sharie Minions said although the former shelter facility isn’t the best option to house people, she recognizes it could be used temporarily for homeless individuals who need a place to stay immediately. But council doesn’t have the authority to direct the building owner to open the shelter at full capacity.

In order to address and bring change for the community’s homeless population, Minions said council’s power lies in advocacy.

“Our power is in explaining the needs and reminding BC Housing and other organizations of the need, and I know that most of those conversations are through me, and council may not be aware of all of them, but I will reassure council that I am bringing these needs forward regularly,” Minions said. “I know that the conversation has become very public since the protest has been going on in front of the shelter, but I think it’s important for the public to know that this need is one that the city and myself on behalf of council has been bringing forward to BC Housing since well before this protest happened.”

Minions said there is a clear need for more low-barrier housing in the community and that there are way too many people with nowhere to go.

“It is not the shelter society’s obligation or responsibility to house every single person in our community. The provincial government and BC Housing have that responsibility and they choose the contractor that they want for that work and approve the work that is going on,” Minions said. “I think that this council has done a fantastic job of showing our willingness to be an active partner in housing projects through donation of land to multiple different projects.”

Minions added that she believes the shelter society have put in an application to demolish the old shelter site and build a new facility specifically for affordable housing for seniors.

“Their application was what’s called B-listed by BC Housing, which is what I’ve been told any ways…they are basically expecting to be funded with the next round of funding that comes forward and BC housing has been working with them on that application, but no commitment at this point,” Minions said. “At this point that building still stands and if there was a will to do it and a will for BC Housing to fund it, to my understanding it could certainly be open and could house people in the interim.”

Another temporary housing solution for the community’s most vulnerable came from the Nov. 9 council meeting from property owner Randy Brown.

Brown owns the rental property on Fourth Avenue that he said is commonly “known as the ghetto.”

“We have an emergency on our hands here in Port Alberni, this is about the homeless,” Brown told council. “The stigma about these people being trouble makers is wrong. These people are mentally ill and are drug addicts. People need compassion, not finger pointing. The shelter is a $10 million building and is great but these people don’t fit into the rules and/or have been banned from the shelter.”

Brown proposed bringing 15 travel trailers onto his property on Fourth Avenue to house the most vulnerable for the winter months, using the city’s water and septic and connecting to hydro.

“My property is ground zero, close to the safe injection site. People feel safe here or they wouldn’t be here,” Brown said.

Brown said two well-known homeless individuals who are frequently seen sleeping on the bench outside Dairy Queen and on sidewalks around town are already living in a trailer on his property.

“In just three days I’ve collected over 40 names of people looking for housing that would not be welcome or would fit into the shelter,” Brown said. “Also, in three days I’ve collected a petition of 74 names of people in town that support my plan. The issue here is these individuals are marginalized, traumatized and do not fit into the strict rules and guidelines set forth by the shelter. This is a temporary solution to support vulnerable population through the winter months.” 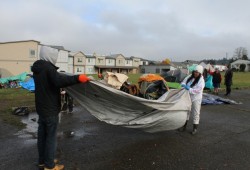 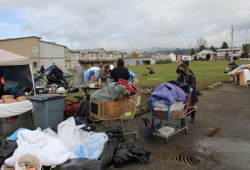 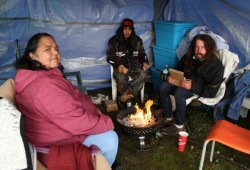