A group of supporters gathered on Third Avenue to distribute Naloxone kits to the homeless and at risk community around the Uptown core and down to Fourth Avenue. The Naloxone kits were sourced after several were taken by the city from the Roger Creek Camp. (Karly Blats photos)

Volunteers at the forefront of Port Alberni’s homelessness issue are feeling frustrated with the city and other community stakeholders who they say aren’t offering immediate housing solutions for the most vulnerable.

On Nov. 19 the second dwelling made by a group of homeless individuals and advocates was torn down by City of Port Alberni officials and members of the Port Alberni RCMP.

The new camp was set up in a city-owned gazebo at Roger Creek Park after campers were evicted by Island Health earlier in the week from the Eighth Avenue lot next to the Port Alberni shelter. The original tent city was formed in conjunction with a protest against the Port Alberni Shelter Society (PASS) that is now under investigation by a third-party reviewer contracted by BC Housing.

After campers were evicted from the Eighth Avenue location, some were given temporary shelter at hotels by Island Health, but protest organizer and advocate Graham Hughes said no permanent solution was offered to house people more than a few nights.

“What we ended up getting was only three (hotel) rooms up until Wednesday (Nov. 18) morning,” said Hughes. “The core group of us was about 25, we’re down to about 14 now. This isn’t touching the homeless who can find couches, hallways or the homeless sleeping down at Randy Brown’s trailers. These are the absolute homeless people who really have nowhere to go right now. We needed a spot where we could just kind of be for the time being thinking something is going to gain traction with Island Health, something is going to happen with the city.”

Hughes said they picked Roger Creek Park as the new location because it’s somewhat out of site and there are washrooms nearby. Tarps were set up to add more privacy in the gazebo and a propane fire pit was available for warming.

“A lot of people were coming to warm up, getting out of the rain because with covid now there’s more lockdowns, more restrictions and everything is closed,” Hughes said. “There’s really nowhere for people to go to get shelter aside from hiding under awnings or door jams.”

The Bread of Life on Third Avenue is undergoing renovations to open in December as a daytime warming centre three days a week for the homeless population, but until then individuals continue to seek places to get warmth.

On the first two days of set up at Roger Creek, city bylaw staff came by the site and issued verbal warnings and on Thursday (Nov. 19) two people were issued trespass notices. Bylaw officers told campers they were not permitted to stay overnight in the gazebo and that the propane fire pit was a hazard.

Later that night, city officials went back to the site and told everyone camping they had to leave immediately and all their belongings were removed and contained by the city.

Hughes said the approximately 10 homeless individuals who were at the gazebo when city staff came by to dismantle it all fled. He said city staff removed all the belongings from the gazebo including Naloxone kits, propane tanks, clothing and blankets.

Hughes said bylaw told him and the campers that staying overnight becomes a problem when people begin to gather in groups because it is a public safety risk.

“Bylaw told us it’s not a problem if they’re by themselves… even though every health authority out here is saying do not use alone, do not be alone, be together,” Hughes said.

City of Port Alberni CAO Tim Pley said individuals were given notice the day before the eviction that they couldn’t continue to occupy the gazebo.

“The people that were occupying the space had been notified and served notice that they should remove personal belongings prior and what was left there was collected by the city,” Pley said. “[The gazebo] is a public-use facility like all parks and if people want to use if for day use, if they want to use any of our parks, they can book the facility.”

Pley said the city has opened facilities in the past like Echo Centre in emergency situations to house people who are displaced, like a few years ago when there was a bomb threat at the old shelter building.

“We’ve been in daily contact with providers like the shelter society and CMHA (Canadian Mental Health Association) and they tell us on a daily basis that there’s unused capacity every night at the shelter. If that capacity gets used up in any day we can open the old shelter as overflow,” Pley said. “We’ve heard the calls for why doesn’t the city open facilities. The city’s not well positioned to provide low-barrier housing or social housing, we are well positioned to lobby on behalf of those folks and the mayor has been very active doing that.”

Pley said if people have no other alternative, they can temporarily sleep in public parks if they move on in the morning, but they can’t set up permanent residence on public land.

By Monday, Nov. 23 volunteers were able to retrieve some of the possessions seized by the city from Roger Creek Park.

Since the removal of campers from the Roger Creek gazebo, Hughes said himself and a few other volunteers have opened their own pockets and bought motel rooms for some of the homeless individuals.

“The days of kind of hoping and believing that city council, Island Health, BC Housing actually cared and want to respond, the days of that hope are kind of dwindling and so really the hope that we have here is in our community itself,” Hughes said. “We have to rally and bring this forward because at this point it is very evident the only people that want to see something done about this are the people getting arrested.”

In a Nov. 19 response to the Ha-Shilth-Sa, BC Housing said the third-party investigation into a number of allegations against the shelter society is underway and expected to take several weeks. BC Housing will not be commenting on the review until it is complete.

Heidi Hartman, Vancouver Island regional director with BC Housing, told Port Alberni city council on Nov. 23 that the Port Alberni shelter does have eight overflow beds available at the old shelter location, just down the street from Our Home on Eighth, if the shelter reaches full capacity.

“What we do find through the housing first principle that BC Housing follows for both our shelter beds and for our supportive housing is the fact that while beds may be available, whether it’s shelter or housing, that folks may choose not to access those resources even though they may be readily available,” Hartman said. “But the really key piece to that is to meet people where they’re at, to always have those resources available if there is a change of mind.”

Speaking on data from the entire province, Hartman said sometimes individuals may choose not to stay in a shelter because of rules and regulations like sharing of information, consent forms, paperwork or shelter operations.

“It is up to our non-profit shelter operators…to have those house rules. As part of an operational review, BC Housing will review those every three years,” Hartman said. “What I will say is for communities where there is only one shelter, and this would be an example in Port Alberni, we need the shelter to be as accessible and welcoming as possible.”

Allegations against the PASS include strict rules that result in individuals being banned for life from staying at the shelter.

Hartman said BC Housing is aware that the housing demand isn’t being met in Port Alberni but that they’re always looking at what partnerships may be available to find a solution. She said there are currently about 80 to 90 applications in Port Alberni made to the supportive housing registry.

“I do just want to highlight the need in our community for additional supportive housing and I know that CMHA is one example of a group in the community that has been working on a supportive housing project for the last few years with support from the city, and there just hasn’t been an opportunity for that to be funded,” said Mayor Sharie Minions at the Nov. 23 council meeting.

Katrina Kiefer, executive director with CMHA Port Alberni, said all communities in the province and across the country are facing the difficulties of meeting the needs of vulnerable populations, and Port Alberni is no different.

“Vulnerable populations, just like any other part of our community, are not generic. Individuals have varying needs which sometimes are different from the solutions that existing programs provide” Kiefer said.

The Canadian Mental Health Association, through a contract with BC Housing and a COVID relief grant, employs outreach workers who connect with vulnerable populations, both housed and unhoused, within Port Alberni.

“With specific reference to the unhoused, CMHA workers establish relationships and learn from the individual what their housing needs are, and what type of housing they will accept,” Kiefer said. “The housing options cross the entire spectrum from temporary night-by-night options, through to private landlord long-term rentals.”

Kiefer said sometimes the housing option available to individuals is provided by the Port Alberni shelter, which sometimes may not be the best fit.

“Where the individual is not receptive to the housing offered, CMHA workers continue to keep contact with the individual and review housing options as the situation changes,” Kiefer said. 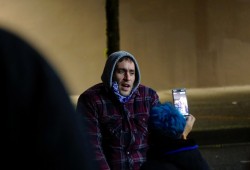