Shawn Lee, owner of Nubo, hosted Herb Dick on Nov. 18 to make amends after the Ahousaht member experienced a disturbing incident at the restaurant this fall. The event also collected clothing and supplies for Victoria’s homeless. (Denise Titian photos)

The owner of a popular sushi restaurant in downtown Victoria invited the family of Herb Dick to his restaurant to ‘break bread’ and receive his apology.

It was an effort to amend the events of Oct. 21, when Herb and his fiancé went to the restaurant for a celebratory dinner. Nubo Kitchen & Bar is one of their favorite sushi restaurants. Dick has said the couple like the upbeat, friendly atmosphere there.

But on that evening their pleasant evening turned sour when an intoxicated patron began verbally abusing them, calling them “f*ing savages”. The man eventually had to be restrained when he attempted to approach Herb in a threatening manner. The man was removed from the restaurant but unbeknownst to Herb, was waiting outside and threw a punch as the couple attempted to get to their car in the parking lot behind the restaurant.

A female server and a passer-by intervened, keeping the attack from escalating. The police were called and the shaken couple contacted restaurant management in an attempt to resolve the matter. Dissatisfied with the response from the restaurant, the couple took to social media, sharing their story there.

Nubo has four restaurants in downtown Victoria. When the story broke on social media at least two of the restaurants started receiving negative reviews, accusing them of being racist.

Nubo Kitchen & Bar owner, whose second language is English, responded by assigning his restaurant manager, Anton Ihl, to connect with Herb so that they could come to an amicable solution.

In the beginning, the couple believed the attacker to be a restaurant employee because he was wearing a Nubo hat. They later learned he was a patron that was a friend of kitchen staff.

Ihl told Ha-Shilth-Sa that when the incident happened, restaurant staff brought the man to the back of the kitchen and sent him home in a taxi. They did not know he came back until he physically attacked Herb outside the restaurant.

After weeks of discussions and planning, Nubo Kitchen & Bar threw an event they called ‘We’re all Human – celebrating diversity’ on Nov. 18.

The restaurant was closed to all but Dick’s invited guests, in part due the social distancing requirements of the pandemic.  The tables were laid out with beautifully plated food and refreshments for Dick’s family and friends.

Herb and his guests were allowed to eat before Ihl thanked everyone for coming.

“We want you all to feel super welcome here,” he told them, adding that the restaurant owners and staff felt bad for what happened on the night of Oct. 21.

Ihl assured his guests that the restaurant management is not racist, and that they are proud of the diverse group that works there.

As part of the apology, the restaurant collected donations of clothing to help the homeless. Dick works for a non-profit organization that delivers services and supplies to the city’s population in need. The donation was gratefully accepted.

Nubo owner Shawn Lee shook Herb’s hand and said he regrets what happened in his restaurant and has assured Dick that the man that attacked him is permanently banned from all four Nubo restaurants in Victoria. Lee told his guests that they pride themselves on hospitality.

“As the leader,” Lee told Dick, “I really apologize for what happened in this restaurant.”

Lee said he wanted to personally meet with Dick but worried about the language barrier and making a mistake. Lee noted that his English is not strong, and he was worried that what he intended to say to the couple back in October would not translate well. He was afraid of unintentionally offending them.

Lee relied on his employee, Anton Ihl, to communicate with the couple and arrange the event.

Herb accepted the apology, adding that he wished his fiancé could have been there. He noted the racial diversity in the room, saying it was nice to be able to sit together as one.

“I sincerely appreciate your apology,” said Dick to Lee. He went on to tell the restaurant staff that when Nuu-chah-nulth people have a disagreement, this is how they fix it. “We sit and eat together and listen to each other.”

Herb’s uncle Guy Louie Sr. said he is a member of the Aboriginal Coalition to End Homelessness in Victoria. Louie said he was grateful for what Lee and his staff did for Herb.

“We live on the principal of Isaak (respect) for one another, care for one another - that’s our teachings,” he said. He told them that it is good to form a new relationship and a better understanding.

Dick admitted that he was angry at first.

“I had hard feelings going by here but today it’s like washing it away; thank you,” he said to Lee.

Dick said he was grateful for the restaurant’s generosity, adding it may take three car trips to get the donations moved.

Lee promised to continue helping with donations of comfort items for the homeless. 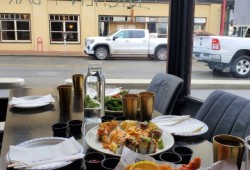 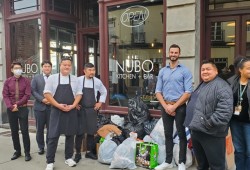