The Best Western Plus Tin Wis resort in Tofino has set up a memorial to remember the 215 children who were found buried at a site near the Kamloops Indian Residential School. The resort invited community members to visit their totem pole and leave a pair of shoes or a stuffed animal, on June 3, 2021. Melissa Renwick photo.

The funding will be used to support First Nations as they begin their own investigations to identify and locate children who died at residential schools. It is also meant to commemorate residential school sites, along with provide mental health support.

Using ground-penetrating radar, the Tk’emlúps te SecwépemcKukpi7 First Nations announced it found the remains of 215 children buried at the site of the former Kamloops Indian Residential School, on May 27.

The discovery sent shockwaves throughout the country prompting Indigenous leaders and residential school survivors to call on the federal and provincial governments to provide funding towards the research and excavation of all sites of former residential schools.

"Finding evidence of a burial site for children who attended the former Kamloops residential school was a stark reminder of the atrocities of the Canadian residential school system and how those continue to be felt to this day," said Minister of Indigenous Relations and Reconciliation Murray Rankin, in a release. "Many other sites throughout the province and country are still the source of unanswered questions and terrible pain. It is imperative that we take our lead from First Nations as we move forward, and we will continue to act quickly and in a co-ordinated way to support their needs.”

There were 18 residential schools that operated in B.C., and more than 100 day schools.

Tla-o-qui-aht First Nation is in the process of applying for federal funding to examine the former Christie Student Residence, where the Best Western Plus Tin Wis Resort now stands.

As the B.C. Ministry of Indigenous Relations and Reconciliation plans their next steps in coordination with First Nations leaders and federal partners, the ministry said details around the application process will soon be released.

“We have spoken with a number of Nuu-chah-nulth nations who have expressed interest in the provincial funding,” said the ministry. “We will continue to work closely with them as their proposals are developed.”

While Ahousaht Tyee Ha’wilth Hasheukumiss (hereditary chief Richard George) said the provincial funding is a start, it “falls short” for what is needed within each community.

The recent discoveries have triggered residential school survivors who have been paying for counselling on “their own dime” to cope with the trauma from attending the schools for decades, he said.

Up until now, Hasheukumiss said the government has overlooked the need to establish direct funding towards health and wellness care centres and that they’re only “stepping up to plate because of the findings,” he said.

“They’re funding money, but where are the rehabilitation facilities that should be built for people to go in and actually work on all of the trauma that came out of this?” Hasheukumiss said. “The unfortunate incidences of rape were a big part of the residential school [experience]. What came out of that was a lot of anger, and a lot of frustration has carried on throughout the generations. So, breaking the pattern – we have to break the pattern somewhere.”

Richard Jock, First Nations Health Authority chief executive officer said in a statement that “acknowledging trauma and the damaging and lasting impacts residential school have on First Nations people, their families and communities is a first step.”

Moving forward, the primary focus must be on community-driven and nation-based culturally safe healing and wellness supports, he added.

Tseshaht First Nation elected chief Ken Watts echoed Hasheukumiss and said that the federal funding is “probably not going to be enough to do it right.”

There are 139 recognized residential schools in Canada. If the $27 million federal funding was distributed equally among them all, Tseshaht would receive less than $200 thousand.

“I’m hoping they go beyond that,” said Watts. “It’s really important to honour those children that never made it home.”

“There’s no room for any kind of acts of violence,” said Hasheukumiss. “It’s only causing more anguish than it is causing good. We as First Nations always have to respect one another – Indigenous and non-Indigenous. We have to move forward in this reconciliation as one.”

Residential school survivors and those who have been impacted by intergenerational trauma can call a 24-hour National Crisis Line at: 1-866-925-4419. 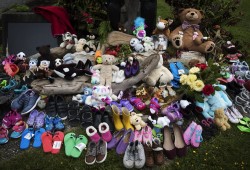