Provincial officials are lauding a new program that is geared at benefitting Indigenous cannabis producers in British Columbia.

Though he believes the program can be viewed as a positive step, Ken Watts, the chief councillor of the Tseshaht First Nation, is still rather skeptical of how successful the B.C. Indigenous Cannabis Product (BCICP) program will be.

The B.C. government announced it was launching the BCICP program on Jan. 18.

The goal of the program is to put the spotlight on cannabis products. Those products, from British Columbia-based Indigenous producers, are in private retail stores, BC Cannabis Stores and also sold online.

The hope of the new program is that cannabis users, who do make purchasing decisions, can more easily identify Indigenous products.

Watts believes some other First Nations could indeed end up benefitting from the province’s new BCICP program. But he feels that by launching a new Indigenous-spotlighted program, B.C. officials are also doing some damage repair.

“I think it is a sign of the province trying to repair a rollout that didn’t see a lot of success,” Watts said.

It has been legal to buy and sell cannabis products in British Columbia, and all of Canada, since 2018. Stores require provincial licenses to sell their wares.

But Watts said black market and grey markets are still prevalent these days.

“People are still growing and selling their own,” he said.

As a result, Watts said many cannabis users continue to buy their products from their local dealers instead of visiting provincially-licensed stores. That in large part is because dealers can sell their products perhaps by as much as half the cost of what stores charge.

“It’s not as successful as it should,” Watts said of the existing establishment of legal pot shops. “I think we’ve got a long way to go in Canada. I don’t want to just pick on B.C.”

Watts said Orange Bridge Cannabis has had some mixed success since its opening. The facility has seen business increase throughout the summer months.

“Over 1 million people drive through here to get to Tofino,” he said.

“The legal cannabis sector in B.C. continues to mature and the B.C. Indigenous Cannabis Product program is an important step to ensure Indigenous business owners are part of this growth and the economic benefits,” she said.

Robinson also believes the program is capable of having some non-business benefits as well.

“Our commitment to a shared prosperity with Indigenous Peoples is critical to the economic health of our province and to advancing lasting reconciliation,” she said.

The BCICP program is available to federally licensed cannabis producers (either the cultivator or the processor) that have at least 51 per cent Indigenous ownership.

In order to be eligible for the program, producers’ facilities must be located within British Columbia.

Those seeking to be part of the BCICP program must already have appropriate and active cannabis licenses that have been issued by Health Canada.

And before applying to the BCICP program, products that wish to be included must be registered with the BC Liquor Distribution Branch.

A program logo will be made available so those keen on buying BCICP products will be easily able to identify them.

Though Indigenous products part of the BCICP program will be spotlighted, they are not guaranteed any special shelf space in cannabis stores. And there is no guarantee of how their sales will go.

Private retailers, however, have no obligation whatsoever to carry Indigenous cannabis products. The program will be strictly on a voluntary basis. 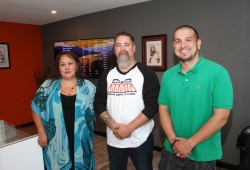 Other Stories in
Business, Tourism

Labour shortages felt in communities across the west coast