Protestors chain themselves to an old-growth tree stump in front of the bridge at the Caycuse old-growth logging blockade, near Port Renfrew, on May 19, 2021. (Melissa Renwick photo)

A court order against protestors interfering in logging operations in the Fairy Creek watershed has been extended until the fall.

The ruling came Friday, Jan. 28 from the B.C. Court of Appeal, two and a half months after the panel of three judges heard arguments from Teal Cedar Products, a forestry company with tenure over a large section of Crown land in southwestern Vancouver Island, and the Rainforest Flying Squad, a collective of activists concerned over the protection of old growth north of Port Renfrew.

At stake is the Fairy Creek valley, located within the traditional territory of the Pacheedaht First Nation and considered one of the few remaining sections of old growth on Vancouver Island untouched by industrial logging. Since blockades first went up in August 2020 to block Teal Cedar's contractors from accessing the watershed, thousands have flocked to Fairy Creek, resulting in one of the largest movements of civil disobedience in Canadian history. Almost 1,200 people have been arrested since May, when the RCMP began enforcing an injunction against interfering in forestry operations in the area.

“Protests are part of a healthy democracy; criminal conduct is not,” stated the recent Court of Appeal decision. “The injunction is all that stands between Teal Cedar and a highly organized group of individuals who are intent on breaking the law the law to get their way.”

But those who speak for the Rainforest Flying Squad have long argued that old growth logging has no place on Vancouver Island in the 21st century, when the mounting threats of climate change make ancient forests and their ecosystems irreplaceable in the face of industrial profits.

“There has already been a lot of logging on our territory. There are many, many clearcuts,” said Pacheedaht elder Bill Jones in an Oct. 21 statement. “If we can keep these last old-growth forests standing, I believe the Great Mother will still be able to care for our future generations.”

The end value of the timber planned to be harvested from the area is approximately $20 million, according to an estimate by Teal Cedar. The forestry company would suffer “irreparable harm” if the court order was not in place, according to the original injunction against the blockades that was granted April 1, 2021 by the BC Supreme Court.

“Teal employs approximately 450 people within its processing and manufacturing facilities,” wrote Justice Verhoeven in the initial court order. “If Teal is unable to log within the area of TFL 46, it will not have an adequate timber supply for its mills. It may be forced to shut down its mills, resulting in layoffs of employees, and Teal's inability to supply its customers.”

An earlier ruling from the BC Supreme Court denied Teal Cedar's application to extend the injunction for another year, citing the infringement of civil liberties during police enforcement – including an impairment of freedom of the press that put the court's reputation at risk.

But that was overturned days later by the BC Court of Appeal on Oct. 8, leading to the Nov. 15 hearing and the Jan. 28 decision in Teal's favour.

In the recent ruling the appeal court clarified that its role is not to decide on the direction of the forestry industry, but rather weigh the interests of a company legally harvesting from a government-granted tenure against the public's right to protest on publicly-owned Crown land.

The court described the Rainforest Flying Squad as a “committed, sophisticated and well-organized” protesting group that has so far raised over $1 million over social media. Over time tactics have become more advanced to block forestry access into the old growth areas, states the court ruling, including the use of large tripods.

“The tripods reach heights of 30 feet, are hastily constructed and structurally unsafe,” stated the court. “Some tripod sitters place nooses around their necks with climbing ropes, chains and bicycle locks. One protester locked himself to a tripod with his face close to an array of nails, so the nails would injure him if an arresting officer touched him.”

Another consideration for the court was the First Nations that call southwestern Vancouver Island home. The Pacheedaht and Ditidaht First Nations have both asked the flying squad to leave, as they have consented to forestry in their territories. The neighbouring Huu-ay-aht First Nations acted as an intervenor in the appeal case, citing its treaty rights to manage resources as it sees fit. In June the three First Nations issued the Hišuk ma c̕awak Declaration, asserting territorial authority over their lands and waters.

When the more permanent injunction came in late January, it appeared that conflict in the Fairy Creek area had already declined. No arrests have been announced by the RCMP since Dec. 2, when a dozen people were taken away for blocking access to a logging road.

“The RCMP has maintained a police presence in the area to respond to any calls for service in support of the local police of jurisdiction (Sooke and Lake Cowichan RCMP),” wrote Corp. Madonna Saunderson of RCMP media relations. “We will continue our roving patrols to ensure the forestry roads remain clear and unobstructed.”

The court injunction against interfering in forestry operations in the Fairy Creek watershed remains in place until Sept. 26, 2022. 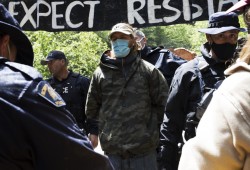 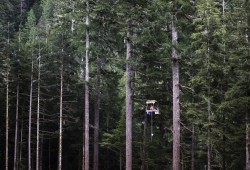