On Jan. 20, 2017 the late Nuchatlaht Tyee Ha’wilth Walter Michael stood before the B.C. Supreme Court, declaring his small First Nation’s efforts to seek rights and title over land they had called home for thousands of years.

More than five years after that statement of claim was filed, his son Jordan Michael, who now holds the head hereditary seat for the Nuchatlaht, stood on the same steps this morning. It’s the first day of a trial to determine the First Nation’s Aboriginal title over its traditional territory on the northern part of Nootka Island.

Although the Nuchatlaht number less than 170 members, the title case is expected to have widespread impacts on First Nations across British Columbia, building upon the historic Tsilhqot’in Nation’s territorial claim that was recognized by the Supreme Court of Canada in 2014.

Aboriginal title entails the right for a First Nation to use, enjoy and profit from its territory, something that the Nuchatlaht believe they have been excluded from concerning 20,000-hectares of Nootka Island.

For the last six years Jordan Michael has run a cedar salvage operation in the area, a practice that rests more easily on his conscience than his past work as a logger.

“I come from a logging background, I’m a faller,” said Michael during a public event introducing the court case at Vancouver’s Roundhouse community centre on Sunday, March 20. “It was a good career, good money, but it just didn’t feel right. It was eating away at my soul.”

But as he scoured through “the decimated forest”, Michael noticed that the trees weren’t the only things affected by logging practices on Nootka Island.

“We were salvaging our fish creek, our sockeye creek,” he said. “We noticed that Western had it all ribboned off and slated to be logged. They were 1,000-year-old trees, 1,500-year-old trees, some of the biggest trees I’ve ever seen in my life, they were all slated to go…That’s when I got serious.”

The title claim area is provincially recognized as Crown land, with a harvesting tenure currently held by Western Forest Products, which subcontracts to smaller logging companies. As “a major employer and contractor on Vancouver Island and one of the largest sources of employment and economic activity in the claim area,” in its statement of claim to the court the forestry company argues that the continuation of its tenure is in the best interests of the “economic development of British Columbia.”

“We’re not against access, but how can we do it better?” said Nuchatlaht Councillor Archie Little, stressing how the First Nation has not benefitted from the harvesting in their back yard.

“I hear time and time and time again, ‘Logging feeds my family’,” he added. “We want it so everybody benefits from the logging. It can’t be just a few people.”

The Nuchatlaht’s lawyer Jack Woodward believes that the case cuts into the injustice of how First Nations were historically excluded from development in B.C. At the March 20 event he referenced an 1888 law that allowed Crown land to be dispossessed.

“It’s open for anybody to apply for this Crown land, except the Indigenous people,” said Woodward of the historical practice. “This is a fundamental thing about this case; it’s a chance to fix the original sin of British Columbia, which is that the land of the Indigenous peoples were just outright stolen.”

Woodward represented the Tsilhqot’in Nation, who successfully had their territorial title claim upheld by the Supreme Court of Canada in 2014. Despite being considered a “semi-nomadic” Indigenous group, Canada’s highest court recognized the nation’s right to determine the future of over 1,700 square kilometres in central B.C. This decision was made based on three factors: the nation’s exclusivity in an area, the occupation of the region before British sovereignty and a historical continuity of occupation.

With Tsilhqot’in as a precedent, now the Nuchatlaht’s case hinges on proving continued occupation of northern Nootka Island since 1846, which is the date that the British Crown asserted sovereignty over the area.

Part of the First Nation’s argument is that the Nuchatlaht have retained their hereditary system of governance for countless generations, and that Tyee Ha’wilth Jordan Michael is the direct descendant of a man who is documented to have met the American sea captain John Kendrick at Tahsis Inlet in 1789.

Since Tsilhqot’in was upheld, B.C. became the first province in Canada to pass legislation that adopts the United Nations Declaration on the Rights of Indigenous Peoples. Article 26 of UNDRIP states that Aboriginal groups should have legal recognition of the lands and resources that they traditionally occupied.

But the province is disputing how the Nuchatlaht’s place on Nootka Island applies to this. In its statement of claim to the court, the provincial government called the First Nation “a relatively small and relatively weak affiliation of groups” that “were not known to effectively assert and defend territory, including the claim area, and other Indigenous peoples claimed and used tracts of land and resources in the claim area.”

Overseen by Justice Elliot Myers, the trial is expected to last as long as 14 weeks. 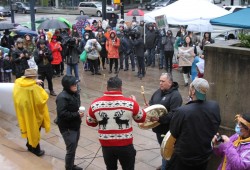 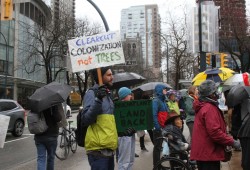