A plan to integrate the United Nations Declaration on the Rights of Indigenous Peoples into provincial policies was released during the second week of a trial in the B.C. Supreme Court, where the province is disputing the Nuchatlaht First Nation’s claim to territory on Nootka Island. Pictured are Nuchatlaht members and supporter on the court steps March 21. (Eric Plummer photo)

The value of working together was emphasized with a plan on how the province will adopt UNDRIP – but this might be hard to believe for members of the Nuchatlaht, as the First Nation fights for Aboriginal title in court.

On Wednesday an action plan was released, listing a wide variety of initiatives in the provincial government’s effort to realign laws and policy with the United Nations Declaration on the Rights of Indigenous Peoples. Among the plan’s main goals is enabling Aboriginal people to “to own, use, develop and control lands and resources within their territories in B.C.”

The plan also noted the need to stop fighting First Nations in court over territorial rights.

“The province recognizes the need to shift from patterns of litigation, and expensive and slow negotiations about title and rights, to cooperative implementation through effective government-to-government relationships,” reads the plan.

But a “pattern of litigation” is what the Nuchatlaht currently face, as the small Nuu-chah-nulth nation is in the first weeks of a B.C. Supreme Court trial over its claim to 20,000 hectares of land on northern Nootka Island. The Nuchatlaht are not claiming compensation from the province or Western Forest Products, which currently holds provincial forestry tenure over the area – but argue that B.C.’s Forestry Act and Parks Act affected its right to use territory the First Nation has called home for countless generations. Nuchatlaht members have continually observed that the area has been heavily logged, damaging salmon habitat and other traditional uses of the remote region.

When the case was directed to Premier John Horgan during a press conference on March 30, he said taking the Nuchatlaht to court was a last resort after discussions failed to resolve the issue.

“It speaks to the diverse nature of British Columbia; Indigenous and non-Indigenous, we’re not always going to agree,” said Horgan. “But courts are obviously the last recourse when there’s disagreements.”

The premier added that there have been other disputes with First Nations in recent years that the province would have fought in court “as a matter of course”, but these were settled through negotiation.

“The case in Nuu-chah-nulth territory that you’re referring to is one that, unfortunately, couldn’t get resolved without it ending up in a court room.”

“According to Nuchatlaht, when I talked to them, that’s not true,” said Judith Sayers, president of the Nuu-chah-nulth Tribal Council, after attending the release of the province’s action plan. “There wasn’t any real push to settle title.”

Now public recognition of UNDRIP, and the province’s Declaration on the Rights of Indigenous People’s Act, hangs over the Nuchatlaht trial, which is expected to be in court for months. The First Nation’s legal team is tasked to prove the continued occupation of northern Nootka Island since 1846, which is the date the British Crown asserted sovereignty over the area.

“In 1846 the Nuchatlaht were there in an organized society, occupying the land as their forefathers had before them for centuries,” said Jack Woodward, who leads the First Nation’s legal team, in his opening statement on March 21, the first day of the trial.

“You can’t say that the groups in 1846, or the date of sovereignty, were necessarily Nuchatlaht,” argued Jeff Echols, who represents the province, in his opening statement the following day.

He said that the modern-day Nuchatlaht does not presumptively gain Aboriginal title from other groups who occupied northern Nootka Island over 150 years ago.

“There were other local groups like Nuchatlaht in the claim area,” said Echols. 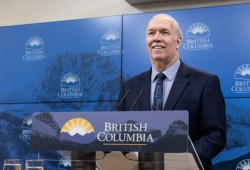