B.C. has to bridge deep divisions before it can put healthy ecosystems and biodiversity ahead of timber supply, says a co-author of the province’s Old Growth Strategic Review.

“This sector has been rife with conflict for a very long time and there’s a lot of scared people out there,” said Garry Merkel, a registered forester and member of Tahltan First Nation. “Everybody is afraid for different reasons. We see each other as enemies and it causes deeply rooted behaviour that stops us from coming together and solving this collectively.”

Despite reassurances from Forest Minister Katrine Conroy, neither Holt nor Merkel is satisfied with the provincial government’s progress adopting recommendations from the 2020 review. Both agreed that key changes — the so-called paradigm shift in thinking — won’t happen unless it can be enshrined in law.

“We’re seeing very little movement on the recommendations,” Holt said. “We need to do a whole bunch of work and that hasn’t happened yet.”

“We’ve been struggling in our implementation of this strategy,” Merkel said, speaking in a collective sense (he continues to serve on an old growth technical advisory panel along with Holt). “I’m not sure if it’s an intent problem or it’s just so big that, frankly, we’re a little bit lost right now and confused. I see it translating myself as confusion, and I think it’s fixable.”

Six months ago, the provincial government promised to engage with First Nations to find agreement on deferring harvest of old growth forests. Logging deferrals, recommended by the strategic review, are a temporary measure to prevent irreversible biodiversity loss while they develop a long-term approach that prioritizes ecosystem health and local resiliency.

Huu-ay-aht First Nations were among the first to respond, confirming in December that 33 percent of their Hahuuli and TFL 44 remains old growth while asserting title at the same time.

“Give us our two years to develop an integrated resource management plan and let that be our plan moving forward,” Dennis told panel participants April 7. “Let us develop that plan. Our land, our decisions.”

The province has so far received responses from 188 of 204 First Nations. To date, 75 have agreed to defer logging of at-risk old growth. More than 60 have asked for more time to decide while incorporating local and Indigenous knowledge.  Only seven First Nations opposed any deferrals in their territory.

“By deferring harvest of nearly 1.7 million hectares of old growth – an area equal to more than 4,100 Stanley Parks – we are providing the time and space we need to work together to develop a new, more sustainable way to manage B.C.’s forests,” Conroy said in an April 1 update.

The early April panel discussion was intended to offer a range of opinions while finding commonalities among them.

Brown, a consultant to industry, argued there is more old growth forest remaining than the three percent claimed by Holt and colleagues in an independent study.

“I would suggest 36 percent of the old growth today is big,” Brown said. “Truly large stands are quite rare. It’s just not necessarily as dire as (three percent) would suggest.”

He agrees forest management must change but feels there has been progress since the 1990s.

“There’s been a balance struck there for right or wrong,” Brown said. “Where we’re going here is a continuation or evolution of sustainable forest management practices that is bringing in First Nation values and more likely to put emphasis on ecosystem health than timber values.”

There is no such balance, Holt contended, pointing to the old growth review: “They said we haven’t had balance at all, that we need to shift how we manage our forests,” she said.

Instead of embracing change, the forest industry took issue with the numbers, insisting there is more old growth than claimed, Holt said. They didn’t buy into the concept of change recommended by the review panel.

“We have to stop combining the various types of old growth into one large number,” Holt said. “When you see a big number, it’s meaningless. There is very little left of the original large-structure forest. Failing to take this into account will result in failure to properly manage remaining old growth forests.”

First Nations are confronted with a Hobson’s Choice, a supposed free choice in which only one option is offered, Holt said.

“In the First Nations context, they’re not being offered change,” Holt said. “They’re being offered the forestry industrial model that got us here and that is the problem.”

Carbon emissions from forestry exceed every other industry while the number of jobs created per cubic metre of timber harvested is a fraction of that achieved in Europe, Holt said. She cited the example of Western Forest Products, which exports rough-cut cedar to New Zealand: “That is problematic from every element and we need to stop doing that.”

Dennis began his panel talk by showing a photo of the House of Huu-ay-aht, constructed from giant cedar and spruce logs two metres in diameter, hewn from old growth forest.

“Moving forward, we want to continue to be able to have these kinds of structures in our territory as our population grows,” said Dennis, a former logger. “That’s what that means to me … the land is our culture.”

The number of Huu-ay-aht people employed in the forest sector has grown during his time in office to 44 from just two in 1995, he noted.

“We’ve seen different companies log the valley and we didn’t like what we saw,” Dennis said. “With this current government, I’m happy how we’re working together to find a balance. It’s our turn to be in the driver’s seat.”

Of the 35 salmon streams in Huu-ay-aht territory, only three or four remain productive, a decline generally attributed to logging impacts.

“You wrecked it; we’re going to fix it. We’re going to find (the path forward) in a very balanced way,” following sacred principle of Hisuk Ma C’awak, everything is one, he said.

Merkel said the common sentiment expressed during the old growth review was a desire for change: “The general public has already made a shift and wants to see things done differently,” he said.

First Nations are pushing the envelope by taking a new approach and thinking of the land as a whole, he said.

“That’s really pushing us to a whole new standard of land care.”

He urged all sectors to “move beyond the games.”

“The old growth report was really not about old growth,” Merkel said. “It’s more about changing the way we look at the forest … Start thinking about this, not as a source of timber, not just as forest, but as a whole.” 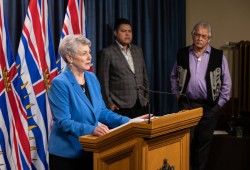 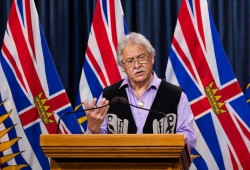 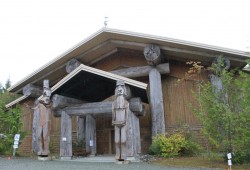