A woman found deceased on street near Victoria Quay in the early morning hours of April 2 has been identified as 30-year-old Nicola-Cree Belcourt. (Submitted photo.)

A woman found deceased on street near Victoria Quay in the early morning hours of April 2 has been identified as 30-year-old Nicola-Cree Belcourt. It appears she had been fatally injured due to an incident involving a vehicle that was not at the scene when police arrived.

According to the RCMP, on April 2, 2022, at approximately 2:30 a.m. police came to find an unresponsive woman near the intersection of Roger Street and Victoria Quay.

“BC EHS and Port Alberni Fire Department were already on scene and attempting life-saving measures, however a woman was pronounced dead on scene,” reads an RCMP media release.

Belcourt had moved to Port Alberni within the last year from her home of Merritt, B.C. in the Nicola Valley.

On Saturday, April 9, her mother, Jacqueline Swakum, arrived in Port Alberni along with her two remaining children, Thomas and Jayme Spence, to bring their loved one home. It was a day trip because the family needed to get back home to tend to cultural practices prior to the funeral.

Tseshaht Chief Councillor Ken Watts says he believes Belcourt’s family made a post on social media announcing that they were coming to Port Alberni to bring their loved one home.

“Some of our people saw the post and decided to do something to help,” said Watts. “Our council member Ed Ross offered to take lead in pulling people together to take care of cultural protocols on both sides.”

People from both Tseshaht and the larger Port Alberni community pulled together to support the cultural business that Belcourt’s family wished to do. Watts said that they provided a quiet space for the family to rest before going to the site where their loved one lost her life.

At noon that day, lower Roger Street was closed off temporarily by the RCMP as the people gathered to release Belcourt’s spirit and to cleanse the area of any negative energy that might linger. Watts said that many other Nuu-chah-nulth people were there to support the family, to hold them up, as they shook the hands of those that attempted to helped Belcourt.

First responders were recognized and invited to take part in healing smudge ceremonies. RCMP Const. Richard Johns said that officers who attended the incident on April 2 were unable to come to the ceremony.

“There were officers on scene to assist in ensuring that other first responders were acknowledged,” he told Ha-Shilth-Sa, adding that the first responders he spoke to were honoured to be invited. “It is truly an honour to be involved in a ceremony which holds such a great meaning to the communities that we serve, and to know that the community cares so much about its first responders as to invite us”

There have been no arrests made in Belcourt’s death.

“Our officers have spoken with witness and have canvassed for video in the area. Officers have identified the vehicle of interest, which has been seized as the investigations continues,” Constable Richard Johns stated.

Const. Johns said that the Port Alberni RCMP General Investigative Service have assumed control of the investigation and are continuing to work with the Integrated Collision Analysis and Reconstruction Service and the BC Coroners Service.

The family of Belcourt thanked the Tseshaht First Nation for their support and words of encouragement before they brought their loved one back home to Merritt. They also thanked first responders and the Port Alberni RCMP, who were there for Nicola-Cree.

Watts sympathized with the family.

“No mom should have to deal with that, that was her daughter,” he said.

Watts is grateful to the people who got together on short notice to support the family. He askes that anyone with information to please come forward and contact the RCMP.

“We will do what we can to answer their questions,” said Watts of Belcourt’s family. “Her life shouldn’t have been cut short, we ask that people with cameras and information come forward.” 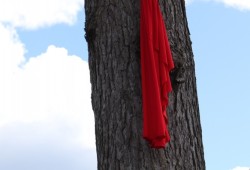