Attendees at the Anacla Old Growth paddle together in a dugout canoe in the House of Huu-ay-aht on April 28. Over 100 people ventured in Anacla for the forestry event. (Eric Plummer photos)

As the province undergoes a transition in the management of old growth forests, the importance of territorial stewardship over logging profits was stressed during the Anacla Old Growth Summit on April 28.

This was the message from the hosting Huu-ay-aht, who held the summit for over 100 who ventured to the First Nation’s village in Barkley sound, next to Bamfield. Among the opening statements was a message from Tayii Ḥaw̓ił ƛiišin, Derek Peters, who emphasized the need to preserve his nation’s resources amid economic demands.

“We’re going to need our territory to sustain us, as it’s done for thousands of years,” said ƛiišin before an audience that included forestry professionals as well as officials from various levels of government and First Nations.

In recent years the First Nation has claimed a growing stake in forestry, which now accounts for 60-75 per cent of annual revenue generated by the Huu-ay-aht Group of Businesses. Last year the Huu-ay-aht-owned Huumis Ventures acquired a 35 per cent share of tenure over Tree Farm Licence 44, a large section of Crown land on southwestern Vancouver Island that partly covers the First Nation’s territory. The number of Huu-ay-aht citizens working in forestry has grown to 44 from two in 1995.

But despite the treaty nation’s focus on forestry, plans are for the Huu-ay-aht to be less reliant on harvesting profits in the future as more opportunity unfolds from an improved road currently being surfaced from Port Alberni to Bamfield.

“We know that we have to manage it in a very sustainable way,” said Huu-ay-aht Chief Councillor Robert Dennis Sr. of forestry resources, noting that a small mill is currently being built at Sarita to explore the viability of processing hemlock. “We’re not afraid to say, for example, if the allowable cut has to be reduced, that’s what it takes to make it a good stewardship plan. We’re willing to look at that.”

Dennis noted that on the Huu-ay-aht’s treaty settlement land the annual allowable cut would be about 60,000 cubic metres if this area were under a provincial Crown tenure.

“But our [hereditary] chief said, ‘No, we want it at 50’,” said Dennis of the annual harvest limit.

Across B.C. harvest declines are expected over the next three years, amounting to a 12 per cent drop from 45 million cubic metres to about 39.5 million, according to projections set by the current provincial budget.

This is due in part to nearly 1.7 million hectares of old growth forest that has been deferred from harvest, protections announced by the provincial government that are making their way through consultation with First Nations.

As she addressed the old growth summit via a video link, B.C. Forestry Minister Katrine Conroy called the industry “foundational for our province,” although she conceded that things are changing.

“Logging deferment is a temporary measure to prevent irreversible loss while we work in partnership with First Nations to develop a long-term approach to old growth management that prioritizes ecosystem health and community resiliency,” she said. “We also know that healthy forests are critical in the global fight against climate change.”

With approximately 50,000 people still employed in forestry, the deferrals were met with resistance when announced in November. The province predicted 4,500 jobs would be lost from the old growth protection, leading many to protest the industry’s decline at the hands of the NDP government.

While Conroy said that old growth harvesting in unprotected areas has dropped by 40 per cent in the last five years, a complete ban on the practice isn’t reasonable.

“It would completely devastate the forestry industry and forest communities,” she said.

Last year saw the largest movement of civil disobedience in B.C. history, when blockades around the Fairy Creek watershed brought nearly 1,200 arrests since police enforcement began in May. The prospect of logging one of Vancouver Island’s last valleys untouched by industrial logging brought an influx of visitors to Pacheedaht territory to oppose forestry activity.

But the Pacheedaht as well as neighbouring Ditidaht and Huu-ay-aht did not approve of the logging protests without consent from hereditary leadership, leading the Nuu-chah-nulth nations to issue the Hišuk ma c̕awak declaration in June 2021. Meaning “everything is one” in Nuu-chah-nulth, this served as a formal assertion of territorial authority over the area. It came with a call for the provincial government to defer all old growth logging in the Fairy Creek watershed for two years, giving the nations time to conduct integrated resource management plans for their respective forest land. Days later the province abided.

“By working together, I’m willing to make sure that Indigenous peoples are full partners in forestry management in your traditional territories,” assured Conroy during the old growth summit.

While the three southern Nuu-chah-nulth nations tasked the government to defer logging in Fairy Creek, the traditional importance of harvesting old growth was readily apparent during the summit in Anacla. The event was held in the House of Huu-ay-aht, a traditionally designed coastal First Nation structure that features four 30-tonne spruce logs running the full length of the building’s ceiling. Measuring five feet in diameter and 130 long, these logs where harvested from the Carmanah Valley in Ditidaht territory before construction began on the House of Huu-ay-aht in 1999.

“Forestry encompasses everything,” said ƛiišin. “Our citizens, they’ve seen the devastation. They’re here and they know what it’s done to our fisheries resources, what it’s done to cedar and harvesting areas.”

“What we’re trying to do now, moving forward, is create balance,” he added, “more of a healthy balance that reflects our sacred values.”

Although the Huu-ay-aht oppose a complete ban on old growth logging, the First Nation’s plans are predicting the proportion of old growth in its territory will actually increase over the next generation as more trees age into the 250-year category.

“In 20 to 30 years from now, we’ll actually increase the amount of old growth, because we’ll be able to control those stands that are going to get into that old-age category,” said Dennis. “We can go from 33 per cent, to 39 per cent old growth two or three generations from now.” 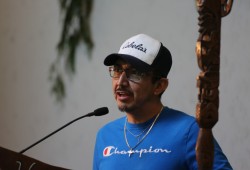 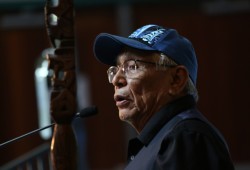 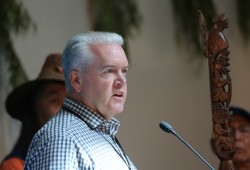