Tony Titian gives a chitukthl knife he made to his aunt. (Submitted photos)

Prior to the introduction of metal, Nuu-chah-nulth people relied on sharpened rocks and shells to cut the fish and game they harvested. Today, they use typical kitchen knives. But just a few decades ago the old-timers made ulu-style knives for fileting fish because they were so much easier to use than a standard kitchen knife.

Tony Titian, 28, of Ahousaht, recalls seeing ten or more of these handmade knives at his grandparents Carl and Lena Jumbo’s place. But since they passed away the knives that Carl made are all gone.

Recalling how the elders would work with these knives, called chitukthl in Ahousaht, Tony said they just looked so much easier to use, so he took it upon himself to learn how to make one.

People sent him photos of chitukthl in their homes and from that he developed a template. He scavenged blades from a decommissioned sawmill back in 2013 and used a grinder to shape blades. He fashioned handles out of cedar and set them on the blade with wood glue.

After sanding the handle and sharpening the blade, Titian went out to see some special people in his life, giving them one of four handmade chitukthl from his first attempt.

“This is my first time making them and I see there’s lots of different styles and materials to make one with,” he noted.

He said it took him a day to make two chitukthl and he plans to make four more.

“I was very glad to see my aunty using the one I gave her…she said it was nice and sharp,” he added.

Dr. Marlene Atleo, ?eh ?eh naa-tuu-kwiss, also from Ahousaht, has written about the use of the chitukthl. Her article can be found here.

Atleo talks about the advantages of using the ulu-syle chitukthl over a long-bladed knife. Having learned to filet fish from her husband’s grandmother, she said, “using a chituklth requires an almost embrace of the fish which is consistent of the relationship of reciprocity we are to cultivate.”

“It’s (salmon) not an object to cut but a way to help it off with its coat so it could be its gift to us. It’s how I was taught including the story of the close cultural relationship,” Atleo said. That, and it’s ergonomically a better instrument to use for filleting salmon.

Titian will begin making four new chitukthl as the people in Ahousaht are filling their smokehouses in the coming days. He loves to see the smiles on their faces as he delivers his gift. 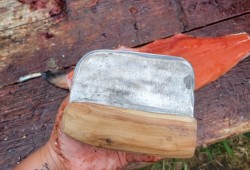 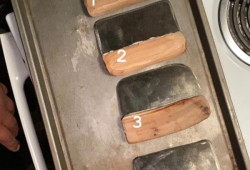