Chad Charlie, right, is pictured with Nathan Apodaca, aka Doggface, in Reservation Dogs, a television show shot in Oklahoma. In Canada the second season is scheduled to premiere Sept. 7 on The Disney Channel. (Submitted photos)

Chad Charlie, an Ahousaht writer, actor and film maker born and raised in Seattle WA., has taken the leap from stand-up comedy to the television screen.

The 32-year-old is now acting and writing for the critically acclaimed Indigenous comedy drama Reservation Dogs.

Filmed in Oklahoma, the series premiered August 9, 2021. In September 2021, the series was renewed for a second season.

According to IMBD, Reservation Dogs follows the adventures of four Indigenous teenagers in rural Oklahoma who steal, rob and save in order to get to the exotic, mysterious and faraway land of California.

To succeed, they will have to save enough money, outmaneuver the meth heads at the junkyard on the edge of town and survive a turf war against a much tougher rival gang.

Charlie plays Mark Don in season two of Reservation Dogs. He says his part focuses on imperfect men trying to be mentors to younger males.

“Mark Don is there to give Bear a job,” says Charlie. “We are flawed but we are trying.”

There are underlying themes around the themes of what it takes to be a good man or what makes you a good father.

Charlie has a background in comedy and that is what brought the attention of producer/writer Sterlin Harjo.

“I was approached by Sterlin while doing comedy,” said Charlie.

Most of the writers for Reservation Dogs have backgrounds in comedy.

It helped that Charlie also has a background in construction, as his character, Mark Don, is a roofer. Charlie said his episode centers around young men growing up without dads.

“There’s conversations about grief and loss, and it’s more genuine because it’s Indigenous people writing it,” he said.

While the subject matter is heavy, the writers and actors manage to bring humor into the story.

“We want to write something our people can relate to and something that will make them proud,” said Charlie.

Starting with standup comedy, Charlie said he began writing and directing his own films in 2018. His first film was Uu?uu~tah. Shot in Ahousaht, is the story of a young chief who is entrusted to be the whale hunter of his village. Just over ten minutes in length, the film can be found on YouTube.

In 2016 Charlie hit a roadblock in his creative journey when he returned from Standing Rock, North Dakota. He said an incident occurred that caused him to suffer from PTSD and, subsequently, depression.

It was his friends in the industry that encouraged him to get back on track.

“You’re a storyteller, you tell good stories – don’t let that die,” they told him. “In comedy I met a lot of dope people who talked me into writing for film.”

Charlie went back to the keyboard and began writing scripts again. He directed Firecracker Bullets, a film based on his experience at Standing Rock.

Hailing from Cherokee Nation, Oklahoma, Studi has a long history in acting going back to 1988. He appeared in Avatar, Geronimo – an American Legend, The Last of the Mohicans and Dances with Wolves.

Also included in season two is Nathan Apodaca, otherwise known as Doggface, who went viral in 2020 after he uploaded a TikTok video of himself lip syncing to Fleetwood Mac's "Dreams" while skateboarding and chugging cranberry juice. Apodaca will play Uncle Charlie to one of the main characters.

The first season of Reservation Dog can be seen on The Disney Channel. The Canadian premier of season two is scheduled for Sept.7, 2022.

Charlie is now back in Seattle but says he has had a great time with the people in Oklahoma.

“I fell in love with Oklahoma…the community, the people are so kind,” said Charlie, adding he may make a part-time home there.

“We (writers) talked about the awards but in the end it’s the people we care about. There are kids who dress up as some of the characters from Reservation Dogs for Halloween,” said Charlie.

His ultimate goal, he says, is to earn the trust of the people at home so that he can come back to tell their stories in an authentic and passionate way.

“I want to make our people proud,” he said. 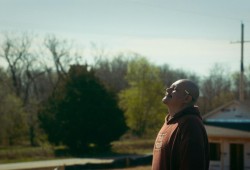 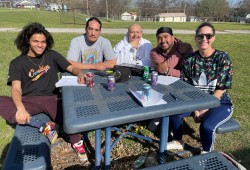