A clay sculpture and two portrait masks made by Nuu-chah-nulth artist Joshua Watts are currently on display at his exhibition at the Victoria Arts Council. (Photo submitted)

Informed by Nuu-Chah-Nulth histories, legends and traditional carving techniques, contemporary artist Ha'wilh Way'anis, Joshua Watts, has transformed the Victoria Arts Council's main gallery to look like a longhouse as a way of honouring his cultural teachings, while commenting on current societal topics.

The Victoria Arts Council is commissioning this work for exhibition, along with an artist book created by Watts with his partner, Kwakwaka'wakw poet and activist Linnea Dick.

A collection of silkscreen prints, wood carvings and video by Watts will be featured with additional programming taking place in-person and online throughout the exhibition. The exhibit will run until Oct. 30.

This is Watts’ debut solo exhibition.

“Gifts from the Ancestors is a show I’ve worked my whole career to be able to present. It shares sculpture and prints that through my years of studying truly share my love for the art,” Watts said. “I titled the show Gifts from the Ancestors because the work I do and all Northwest Coast art are the gifts our ancestors give to us, and the future generations to help us in life and guide us on a good path in life.”

Watts is a Nuu-chah-nulth and Coast Salish First Nations professional artist and cultural carrier. He was raised in Squamish away from his ancestral territories of Port Alberni and Lake Cowichan.

“I am from the Tseshaht nation, and Tsuubaasaxt nation.  I didn’t grow up in my communities but was adopted in the Squamish nation when I was young,” Watts said. “I now return home to Port Alberni every year and make sure to visit my uncles, aunties, nieces and nephews as much as I can. I also have a current project in Lake Cowichan with the museum to do a totem pole, which is on the traditional territory of the Tsuubaasaxt Nation.”

When he was growing up, Watts had little connection with his ancestral culture, but after reconnecting, he realized the importance of culture and art.

“I grew up without culture for most of my childhood. I started canoe racing in my early teen years and that’s when I was reintroduced to my culture,” he said. “I went home to Port Alberni every now and then, but it wasn’t until I received my traditional Nuu-chah-nulth name Ha’wailh Wayanis that I began to really take the time to learn my history, learn my genealogy and get familiar with my ancestors’ art.”

Watts added that learning about his culture helped him through his healing journey.

“Growing up my family had a really hard time. Because of inter-generational trauma, residential school and just general poverty, growing up was tough,” Watts said. “But whenever I participated in culture, or contributed to ceremonies, or just spent time on the land I could forget about the troubles in life. Culture really was a huge part of giving me my most cherished memories and valued life lessons. I highly encourage the youth to participate where and when you can and just remember your ancestors love you.”

Watts has studied under renowned artists such as Ray Natraoro, Wayne Alfred, Corey Bulpitt, and Linda Lindsay, as well as the late Chief and master carver Beau Dick. Watts said growing up he didn’t consider himself an artistic person, but more of a jock, playing every sport he could. But he felt he was creative and art was something he always appreciated.

“My mentor Ray Natraoro was the one who really introduced me to Northwest Coast art. We spent years together and when I moved in with him and his family I became a part of the family,” Watts said. “My style is influenced definitely by the many teachers I’ve had. I would say I’m known mostly for my traditional Nuu-chah-nulth art. I carve traditional and non-traditional wood pieces, paint, as well as make my own silkscreen prints. However, I am also experimenting with contemporary art which can be seen throughout the show.”

Today, Watts has dedicated his practice toward youth development and mentorship programs and is an advocate for cultural revitalization amongst Indigenous youth and passing on traditional knowledge. 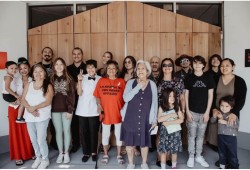