A warmer fall has brought frequent encounters with black bears on western Vancouver Island, leading the Conservation Officer Service to use residents to keep attractants secured. (Wildsafe BC photo)

A late start to summer and an unusually warm autumn seems to be bringing out more black bears than usual, seeking food sources for insatiable appetites as instinct drives them to prepare for winter.

In Port Alberni it is not uncommon to see black bears roaming the streets, knocking over trash and compost bins late at night. All city-provided compost bins in the small city have brass clips that help keep bears out, but not all trash bins have them.

Conservation Officer Dan Eichstadter says it is illegal to put unsecured trash out on the street prior to the morning of pick-up.

“Unsecured garbage is the No. 1 bear attractant,” Eichstadter told Ha-Shilth-Sa.

He advises to keep bins locked up in a garage or outbuilding until collection day.

“Every year we get reports of bears accessing trash cans – we can’t control the behavior of wildlife, so it’s up to people to manage their behavior,” he added.

Bears will hibernate, or sleep through the winter, in cold climates. To prepare for hibernation they go through hyperphagia beginning in the summer. This means that they are genetically predisposed to increased appetites in the months before winter to build up fat stores.

But Vancouver Island has mild winters, so bears do not hibernate all through the season. According to Eichstadter, they may sleep for a week or so, wake up, get a drink and roam around before going back for another week of sleep.

“They still go through hyperphagia – they need to do this in order to survive hibernation,” he added.

The unusual summer weather may have an affect on what black bears are eating. During the early summer, there was a lot of rain and cooler-than-average temperatures. By July, the weather heated up and there was very little rain. Berries require lots of water, so there were fewer berries than normal in late summer. Eichstadter noted that the salmon runs arrived later than usual and this could have an effect on bears.

In Ahousaht there were four bears spotted in the village in the past three months. According to residents, some of the bears exhibited aggressive behavior, chasing family pets, vehicles and, on one case, a man was chased in broad daylight by a bear.

One man, who wishes to remain anonymous, said conservation officers were called and so were the RCMP.

“We tried calling conservation officer, they did not want to come all the way over here,” he told Ha-Shilth-Sa. “We tried the RCMP and they told us to put them down ourselves.”

According to the resident, they tried to scare the bears away with noise-making explosives called bear bangers and also by firing shotguns. But the bears were fearless, so they killed three of them.

“It would have been nice if we could trap and relocate them,” he added.

Eichstadter confirmed that the Conservation Office received a report of a man being chased by a bear in Ahousaht and no contact was made.

“Ahousaht Council has a designated Ahousaht resident to be their wildlife protection officer. This is not in consultation with the Conservation Services,” said Eichstadter.

“We do want to go to Ahousaht and we would readily go,” said Eichstadter, adding conservation officers will be reaching out to Ahousaht leadership to offer assistance.

“Wildlife interactions happen everywhere, Indigenous communities or not,” said Eichstadter. “If we can get there early enough in the bear behavior, we may be able to make it where the bear can continue to live and co-exist.”

If there is significant risk to human safety, conservation officers will work to trap the animal and relocate it.

“Calling the RAPP line does not mean we will show up and kill the animal,” he stated.

Early intervention is important to saving the lives of wildlife, whether it be bears, cougars or wolves.

“We need to coexist with wildlife in our communities,” added Eichstadter.

People can help by reducing attractants around homes, such as taking bird feeders in at night, cleaning barbeques, harvesting fruit trees, as well as securing outdoor pet food and trash.

The B.C. Ministry of Environment and Climate Change offers this advice for smokehouse owners. Ensure that the smoker site is as clean as possible. Fish entrails and by-products should be cleaned up and removed immediately. Fish processing sites should be located away from the smoker to reduce the intensity of attractants.

Smokehouses can be protected and secured by the installation of electric fencing. Heavy bush surrounding smoker sites should be removed, according to the ministry.

He noted that Tofino, Ucluelet and Toquaht share a Wildsafe community coordinator.

“This person works on prevention that works on improvements to avoid conflicts between humans and wildlife,” he shared.

He encourages British Columbians to call the RAPP line to report problem wildlife in urban areas. The number is 1-877-952-7277 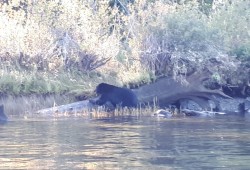 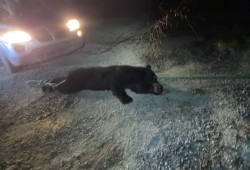 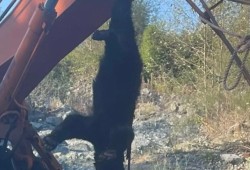