The Tla-o-qui-aht are left in the dark over the reasons behind a decision from the Independent Investigations Office, as details will have to wait until after a trial set for June. Pictured is Opitsaht, where the fatal incident occurred on Feb. 27, 2021. (Melissa Renwick photo)

B.C.’s police watchdog has ruled out criminal charges from a fatal RCMP shooting in Opitsaht last year, but those affected by the tragedy will have to wait until an upcoming trial is completed for reasons why the officer is being cleared.

On Feb. 27, 2021 two Tofino RCMP officers responded to a call from the Meares Island village reporting a woman was being held against her will. At approximately 9:30 p.m. police arrived at a residence in Opitsaht to “locate a woman in distress,” according to an RCMP press release. An altercation ensued, resulting in the shooting death of 28-year-old Tla-o-qui-aht member Julian Jones, while another man was taken into police custody.

The Independent Investigations Office of B.C. was on the scene the next day to investigate. The IIO is described as a “civilian led” oversight agency that gets involved when death or serious injury occurs while police are present. After over a year of investigating the incident, on Nov. 17 the agency determined not to recommended charges to Crown counsel, as “there is no reasonable grounds to believe that any officer committed an offence.”

“We’re highly disappointed with the findings,” said Tla-o-qui-aht Councillor Francis Frank, noting that the announcement has emotionally triggered the family of Julian Jones. “We’re also extremely upset with the manner that the IIO chose to roll the findings out. More disturbing for us is that they provide no rhyme, reason or rationale behind the findings.”

According to Ronald J. MacDonald, the IIO’s chief civilian officer, upcoming legal proceedings presented the agency with a tough decision of when to release its findings. A trial from the incident involving the surviving participants that was scheduled for October has been adjourned until June 2023. Crown counsel asked the IIO to not release details of the investigation until after the trial so that the judicial process isn’t compromised.

“I do understand the significant frustration involved,” said MacDonald. “Either way, the reasons are going to have to wait until what looks like next year.”

For the first time, the IIO appointed an Indigenous monitor from the Tla-o-qui-aht community to represent the standpoint of the First Nation. Thomas George submitted a report at the end of the IIO’s investigation, which also will not be publicly available until after the upcoming trial.

“He came into our office and spent the better part of two weeks going through anything he wanted to see in the file,” said MacDonald. “Our goal was to get that opinion as to determine whether there were things we may have missed, anything about the community we weren’t aware of that he may be able to inform us about.”

“I have no recommendations for the integrity of the investigation; the investigation was carried out with excellent procedure,” said Thomas George, in a statement included in an IIO press release from Aug. 2. “I do not see that anyone else needs to be spoken to in order to complete this file. The interviews and evidence collected were fulsome. I am content with the way the IIO conducted the investigation.”

Despite this process, the IIO’s recent announcement has sparked frustration through Nuu-chah-nulth communities. On Nov. 17 the Nuu-chah-nulth Tribal Council stated it was “disillusioned, frustrated and devastated” by the agency’s decision to not recommend charges against police.

Jones’ death by police gunshot was the second to affect a Tla-o-qui-aht member within a year, after the shooting of Chantel Moore in Edmundston, New Brunswick on June 4, 2020. Police were called to the 26-year-old’s home to check on concerns others had for her safety, but this late-night wellness check ended with Moore be fatally shot. The Edmundston Police Department stated that the officer, Jeremy Son, was defending himself as Moore approached him with a knife, but a coroner’s inquest determined the incident was a homicide. The New Brunswick prosecution service deemed Son not criminally responsible, based on an investigation by a Quebec-based police oversight agency.

In its response to the recent IIO announcement, the Nuu-chah-nulth Tribal Council stressed the need for better police training in de-escalation and disarming people rather than shooting to kill, as well as improvements in communication protocols with First Nations.

“We believe that there has to be other ways and means to defuse or to de-escalate a situation,” added Frank. “Without knowing all of the details of the circumstance, the RCMP could have easily called one of our council members or community members to go in and check on the situation before they responded.”

“Or they could have accompanied them to go in,” continued the Tla-o-qui-aht councillor. “Some familiarity would have helped diffuse the situation from where it escalated to.”

Although discussions with the RCMP have been “cordial” since the fatal shooting in Opitsaht, Frank believes that clear guidelines are long overdue on how police should enter the First Nation’s communities.

“Really there should have been a greater urgency on both parties, including ourselves, on the need to lay in place a clear understanding of our relationship and what protocols should be followed when coming into our communities,” he said. “That’s not in place yet, and one would have thought after that incident that we all have agreed to expedite that.” 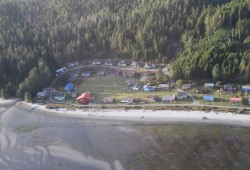