A group of First Nations representatives attended the COP27 international climate conference in Egypt in November to speak about how global warming and industrialization has impacted Indigenous territories in B.C. Pictured is a migrating salmon. (BC Assembly of First Nations photo)

How is global warming affecting First Nations communities in British Columbia? B.C. Assembly of First Nations Regional Chief Terry Teegee says we have seen climate catastrophes in the form of atmospheric rivers, drought, forest fires and a heat dome in the past few years alone.

“The effects of which are most profoundly felt in First Nations communities,” he said in a virtual media conference.

The BCAFN sent a delegation to the COP27 conference, which was held in Sharm El Sheikh, Egypt from Nov. 6 to 18. Hugh Braker of Tseshaht was there in his role as political executive at the First Nations Summit.

COP27 brought together more than 2,000 speakers and 35,000 participants to take part in discussions around global warming and the environment at the United Nations Framework Convention on Climate Change. COP27 means Conference of the Parties and 27 indicates the number of conventions held.

“The hosting of COP27 in the green city of Sharm El-Sheikh this year marks the 30th anniversary of the adoption of the United Nations Framework Convention on Climate Change,” said Egypt President Abdel Fattah El-Sisi. “Thirty years and twenty-six COPs later, we now have a much clearer understanding of the extent of the potential climate crisis and what needs to be done to address it effectively.”

“The science is there and clearly shows the urgency with which we must act regarding rapidly reducing emissions of greenhouse gases,” continued Fattah El-Sisi, who stressed the need to help developing countries adapt to the negative environmental impacts from global warming and industrialization.

He noted the ongoing food security crisis and drought in Africa as examples.

Closer to home, five Indigenous delegates that attended the conference shared their concerns. The BC Assembly of First Nations and members of the First Nations COP27 delegation from British Columbia held a virtual media conference November 16.

Noting the seasonal storms that are intensifying and ocean levels that continue to rise, Hugh Braker said that it’s the Indigenous communities that are being most affected.

Union of BC Indian Chiefs Executive Kukpi7, Judy Wilson, pointed out that, by the end of the century, the average global temperature is expected to rise by 2.5 C, and we’re already experiencing a 1.1 C increase.

“We are already experiencing loss and damage,” she said.

The UN, she said, recommends that world leaders strive to keep the situation from getting no worse than it already is. The plan is to align, she said, alluding to the BC First Nations Climate Strategy Action Plan.

According to BCAFN, they have been working on a provincial First Nations Climate Strategy for the past three years.

Atmospheric rivers are something new in our history, said BCAFN Board Member Chief Harvey McLeod.

“The water took land, homes, crops, roads, and livestock,” he said. “There were evacuations. Many of the homes damaged or destroyed were uninsured. The village of Lytton burned and some of our people are still living in hotels more than a year later.”

To rebuild is expensive, he added.

“This fall, the salmon were dying due to lack of water as they waited downstream to get to their spawning grounds,” said McLeod.

Hugh Braker said Indigenous people of the world are the most affected by climate change.

“Yet we’re at the bottom of the economic ladder,” he added. “Rich folks move to higher ground. We don’t have that luxury. It affects our way of life. We have nowhere to go.”

He urged the governments of the world to speak to their Indigenous people and plan for the catastrophe that’s about to fall upon them.

“It is not of our making,” said Braker. “We need to have a large Indigenous contingent there to bring a voice loud enough that the leaders of the world hear them. This is a threat to our culture, traditions, way of life. I can’t imagine our people without cedar or salmon.”

Taylor Behn-Tsakoza was at the COP27 conference as a youth representative with the BCAFN and Assembly of First Nations. She said COP27 had the highest number of Indigenous representatives of all the COPs.

“Hope is alive, seeing our people have influence to help change the mindset of world leaders,” she said.

The BC delegation heard reports at COP27 and recognize there is a need for better disaster response and mitigation.

“We need to access more financing and the necessary resources to deal with the climate change issue,” said Teegee.

B.C.’s Environment and Climate Change Strategy Minister George Heyman said there is still much work to be done to bend the curve. He acknowledged the impacts of global warming on Indigenous people, affecting their food sources, land, even their languages, he said.

Heyman thanked the leadership council for First Nations Climate Action Plan Strategy, saying  B.C. will work with them to blend plans and bridge gaps. The province has committed $2 million to the First Nations Leadership Council gathering where the issue will be discussed.

Heyman committed to speak to First Nations on how to achieve the 33-38 per cent reduction in oil and gas emission by 2030.

Taylor Behn-Tsakoza encouraged the youth of the world to learn more about climate change. “I hope to see more youth, not only Indigenous, be a part of this so they can listen, learn and add their voice to this discussion,” she said. 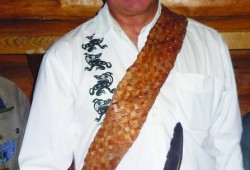 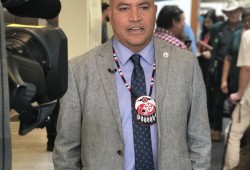 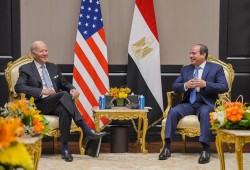 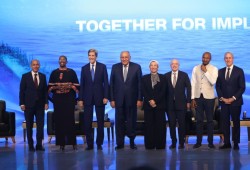