According to family, Clifton Johnson dreamt of becoming a bee keeper. His picture is seen in front of the Port Alberni Friendship Center, where the 20-year-old's body was found on March 27, 2021. A murder charge and arrest was made against a 16-year-old for the incident, which has gone to a preliminary inquiry. (Denise Titian photo)

The families of two Nuu-chah-nulth men have been gathering at the Port Alberni courthouse as the preliminary inquiry gets underway following the March 2021 murder of 20-year-old Clifton Johnston, an Ahousaht member.

The accused is a Nuu-chah-nulth youth who was 16 years old when arrested in January 2022. He cannot be identified due the Youth Criminal Justice Act. Members of his family were in the courtroom to hear testimony on Dec. 13.

According to the federal Department of Justice, a preliminary inquiry is a judicial hearing that is used in serious criminal cases to determine whether the evidence assembled by the Crown against an accused person is sufficient to proceed to a trial.

“The preliminary inquiry is not a trial in the strict sense, although evidence is given under oath and the accused or the accused’s counsel is entitled to cross examine any witnesses summoned by the Crown,” stated the Department of Justice.

The court issued a publication ban in relation to the inquiry. Information gleaned during a preliminary inquiry is not usually released to the public. This is a measure to protect information in the event the matter goes to trial.

In the early morning hours of March 27, 2021, a pedestrian discovered the lifeless body of 20-year-old Clifton Johnston in front of the Port Alberni Friendship Center in the 3500 block of 4th Avenue. According to the RCMP, he had suffered stab wounds to the chest.

Described has a happy, fun-loving boy by Ahousaht elder Wally Samuel, Johnston, a former Port Alberni resident, was visiting town for the weekend. His mother, Iris Clarke, said they were on a trip from their home in Abbotsford, B.C., when she dropped him off for a visit in Port Alberni.

The preliminary inquiry is being held at the Port Alberni Courthouse at 2999 4th Ave from Dec. 13 to 15. If the judge determines that the Crown has met its burden of providing sufficient evidence against the accused, the matter can proceed to trial. 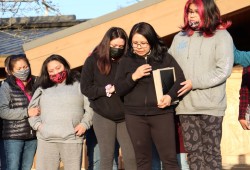