The National Council for Reconciliation Act was first introduced to Parliament by Marc Miller, minister of Crown-Indigenous Relations on June 22. Pictured is Miller speaking in the House of Commons. (YouTube video still)

Over the coming months the Senate is tasked with finalizing legislation that pledges to hold the federal government accountable in improving Canada’s relationship with its Indigenous peoples.

But the day after Bill C-29 was unanimously passed by the House of Commons, the Inuit Tapiriit Kanatami withdrew support for the legislation, while another national organization advocating for off-reserve Indigenous people stands against the act.

The National Council for Reconciliation Act was passed by the House of Commons on Dec. 1, and is now in the hands of Canada’s Senate at second reading. First introduced to Parliament by Marc Miller, minister of Crown-Indigenous Relations, on June 22, Bill C-29 is designed to form a group that would hold Ottawa accountable in its efforts to improve the state of Canada’s Indigenous Peoples. The bill specifically follows Calls to Action 53-56, which were released by the Truth and Reconciliation of Canada in 2015.

In its current state, Bill C-29 specifies a council of nine to 13 members that would function “as an independent, non-political, permanent and Indigenous led organization” to advance reconciliation efforts in Canada. The council - or board of directors - would monitor progress “in all sectors of Canadian society”, “advancing a rights-based approach to self-determination” through research, according to the Dec. 1 draft of the bill.

The group would be tasked with delivering reports to the minister of Crown-Indigenous Relations. Its work covers a range of issues that include the number of Aboriginal children in foster care, educational funding, improving health indicators for Indigenous people and addressing overrepresentation in the justice system, while decreasing the criminal victimization of Aboriginal people.

Serving a maximum of two, four-year terms, at least two thirds of the council members must be Indigenous. Directors are to be appointed to the council from four organizations: The Assembly of First Nations, the Métis National Council, the Native Women’s Association of Canada and the Inuit Tapiriit Kanatami, which advocates for the rights of Inuit people across Nunavut and the rest of Canada.

The rest of the council would be determined by applications to the representatives from these four organizations.

“The other directors are to be elected following an application process established by the board of directors,” states the bill.

But before the council has even been formed, dynamics around its composition have raised serious issues for the future of C-29. On Dec. 2, the day after the House of Commons passed the bill, Inuit Tapiriit Kanatami President Natan Obed stood in front of the chamber announcing that the organization had withdrawn support of the legislation. Obed noted concerns that the council could undermine the Inuit’s direct relationship with the federal government, while the bill does little to make Ottawa accountable to reconciliation.

Behind Obed stood Crown-Indigenous Relations Minister Marc Miller, who said amendments to the bill could still be made as it is debated in the Senate.

“All they’re doing really is they’re finding reports and press release statements, but it’s nothing that I think is tangible enough to make sure that the federal government is following through on reconciliation,” she said. “That’s one of the shortcomings of the legislation.”

The omission of the Congress of Aboriginal Peoples has also raised discussion as the bill was debated in Ottawa. Marking 50 years of operation, this organization advocates for Canada’s Indigenous People who live off-reserve.

“With the vast majority of Indigenous Peoples living in urban and rural areas this extraordinary move by the Liberals is a slap in the face to thousands of survivors who live off-reserve,” said CAP National Chief Elmer St. Pierre in a press release, referencing former residential school students.

“How will they choose these people? It’s really difficult,” commented Sayers about the reconciliation council. “That will be one of the challenges, who gets to be on the council.”

Senator Michèle Audette, whose mother attended residential school, expressed confidence in how the council will be selected when the bill was debated in Ottawa on Dec. 6. Representation gives preference to Indigenous elders and survivors of residential schools or their descendants.

“I want to believe that the people who are appointed to sit on this new board of directors will have the expertise and knowledge to serve everyone across Canada,” she said. “I feel confident of that at this point in time.”

If the bill passes, the intent of the legislation is to make the reconciliation council a non-profit organization that can function independently of federal funding. As Bill C-29 has passed through Parliament, the financial sustainability of the board of directors operating year after year was questioned multiple times.

During a debate on Dec. 6 Senator Ratna Omidvar asked why the council wouldn’t be financially supported by the federal government.

“Many people in Canada now, especially people from the Indigenous community, have concluded that charitable giving in Canada is a colonial construct,” she said. “By going down this path of seeking charitable funding, the council could, in effect, be buying into a colonial path.”

“By discussing not with the government, but with the people who were involved, right now it’s at the stage where they want to make sure that they are not officially attached to the federal government in order to keep their independence, knowing that the funding will either be there or it may slowly go down, or it may increase,” responded Audette. “They were aware of that when they had those discussions.” 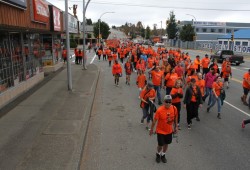 Revenge, gunboats and the kidnapping of ‘Maggie Sutlej’, as told from an Ahousaht perspective