Indigenous knowledge prioritized for biodiversity as countries move on from COP15

After years of negotiation, and a two-week meeting in Montreal, 196 countries came to an agreement on the future of global biodiversity. With 23 targets aiming for 2030 and four goals set for 2050, the global community will work towards protecting and restoring biodiversity across the globe in partnership with local Indigenous communities.

The International Indigenous Forum on Biodiversity (IIFB), formal advisors to the Convention of Parties (COP), published a press release celebrating the strong recognition of Indigenous rights within the Kunming-Montreal Global Biodiversity Framework.

The framework identifies goals and targets, such as globally cutting food waste in half, conservation management for 30 per cent of the world's land, ocean, inland water, and coastal areas, phasing out of industrial subsidies that harm biodiversity, reduction of excess nutrients, as well as the risk of pesticides and chemicals.

“Indigenous Peoples and local communities are happy that finally we are here,” said co-chair of the IIFB, Lucy Mulenkei in the press release. “With most of the recommendations that we had submitted and negotiated already reflected, we leave Montreal happy and ready for the implementation journey. We are glad we never gave up even when times were tough.”

Figueroa said that this is a big achievement.

“The international community [is] recognizing, specifically, Indigenous people are contributing to the conservation of biodiversity,” said Figueroa.

“For us, this was very important because it has an impact,” said Figueroa. “The Convention on Biodiversity [is] a treaty that is signed by 196 countries.”

Eighty per cent of the world's biodiversity is protected by Indigenous peoples, according to COP 15 participants.

On Dec. 7 Justin Trudeau announced that 800 million dollars will be distributed to four Indigenous-led conservation groups to help implement conserving 30 per cent of land and water by 2030 and establish a partnership with Aboriginal people in Canada.

“Indigenous Peoples have been caring for the lands and waters of Canada since time immemorial. First Nations, Inuit, and Metis have unique relationships with nature and knowledge of responsible stewardship as a way of life,” reads the press release announcing the Canadian government's intention to partner with Indigenous communities in the pursuit of conservation. “By working together and supporting Indigenous Peoples in protecting more nature across the country, we are continuing to listen to their voices and helping ensure the world we leave to future generations is safe and healthy.”

“We still have a journey, a journey that Indigenous Peoples and local communities have always taken. We will move forward to ensure the implementation of the GBF is a success,” said Mulenkei in a IIFB press release.

“International documents are an international instrument,” said Figueroa. “It [has] legal weight.” 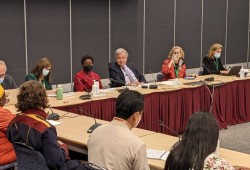