This summer the Huu-ay-aht First Nations continues its tours of the ancient Kiixin village site. In 2017 the First Nations hosted 53 separate tours, leading a total of 501 travellers through Kiixin. (Chris Thorn photography)

The public once again has the opportunity to tour the only known remaining complete traditional First Nations village on the southern B.C. West Coast this summer.

The Kiixin village and Fortress National Historic Site of Canada was inhabited by Huu-ay-aht ancestors for more than 5,000 years, and the village was designated a national historic site in 1999. Kiixin is the traditional capital of the Huu-ay-aht that still features standing traditional architecture. The Huu-ay-aht are now offering free guided tours of the ancient village until the end of September.

Kiixin (pronounced key-hin) is strategically set between the exposed, rugged outer coast and the protected inner waters of Barkley Sound. During the tours, guests hike the trail to the site while exploring an old-growth rainforest and protected beaches. Along the way, guides will share Huu-ay-aht knowledge, history and culture.

Trevor Cootes, Huu-ay-aht executive council member with the economic development portfolio, said the Kiixin tours have been a goal of the Huu-ah-aht’s for years.

“The tours are kind of part of an idea of promoting, or creating, a tourism product around the Kiixin village site, while at the same time meeting the goals of the nation,” Cootes said. “The goal of the tour is to showcase and share our culture but also to do it in a way that’s guided and directed and created from Huu-ay-aht - and so in doing that it’s authentic.”

Each tour to Kiixin lasts approximately three hours and is guided by Huu-ah-aht traditional knowledge holders. The tours were originally launched last summer as part of a pilot project. Last year, the Huu-ay-aht hosted 53 different tours for 501 people. Visitors came from all over, including B.C., Alberta, Ontario, Germany, France, England, Spain, Switzerland, Japan and Korea and ranged in age from 18 to 74.

“It’s a great thing for a tourist coming into B.C. or Vancouver Island or specifically to our territory that want to have a First Nation’s experience,” Cootes said. “I knew there was an opportunity that we have the ability to showcase our culture in a way that kind of meets the need of somebody wanting to have a First Nation’s experience, but at the same time being in a way that respects and honours the tradition of Huu-ay-aht.”

The 19th century village exhibits evidence of occupation dating back to 1000 B.C.E., and is still considered a sacred site to present day Huu-ay-aht. The site has four distinct archaeological sites, according to a written history found on the Huu-ay-aht website: the main village of Kiix̣in, including the standing remains of eight houses; the fortress site; a small midden; and a midden with remains of three houses. The Huu-ay-aht moved from Kiix̣in in the 1880s, and the village has been untouched ever since.

“Guests can still physically touch longhouse beams that have been there for over 300 years. It’s just an amazing experience,” Cootes said.

The tours also provide economic benefits for the Huu-ay-aht.

“Kiixin is an opportunity for Huu-ay-aht to develop tourism that is very comparable to what Haida has done over the past couple decades,” Cootes said.

“Kiixin is kind of the cornerstone to what Huu-ay-aht is within our culture but also going to be the cornerstone to what tourism development is to Huu-ay-aht,” he added. “So taking the accommodation, food and beverage and tours and wrapping them around Kiixin and making this experience where people can either hike out there, canoe out there, do activities around Kiixin like fishing and paddling.”

The Kiixin tours depart daily from Bamfield until Sept. 30. The tours are complimentary and can be booked by emailing info@kiixin.ca or call 250-735-3432. For more information, visit www.kiixin.ca. 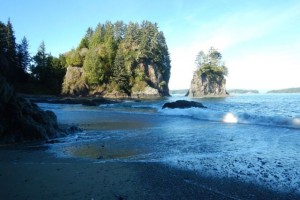 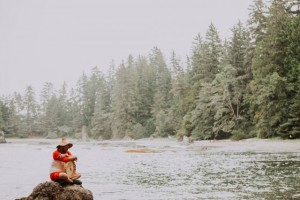 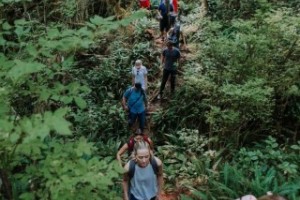