A Specific Claims Tribunal underway in Ahousaht this week revealed to a judge that Flores Island was part of territory Ahousaht fought over and won during a war in the early 1800s. (Ha-Shilth-Sa file photo)

A Specific Claims Tribunal hearing is taking place in Ahousaht that began April 30. A judge and two legal teams arrived at the Thunderbird Hall to hear testimony about Ahousaht history and areas in their traditional territories, locations that were actively used but taken away through various government mechanisms.

Ahousaht Ha’wiih are seeking resolution with the federal government over lands that they fought over for more than a century. Chief Councillor Greg Louie says the claim is about several parcels of lands taken from Ahousaht, sometimes by force. Historical records show that some of the homes located at the sites in question were either taken over by settlers who moved into Ahousaht-built houses while the owners were away, or the homes were burnt down or otherwise destroyed.

According to court documents, Ahousaht filed the Additional Land Applications for Ahousaht Settlements Specific Claim with the Department of Indian Affairs in November 2011. The claim was made “in respect of breaches by Canada relating to the pre-emption of Indian settlements and fishing stations located on Blunden Island, Vargas Island, Flores Island, the head of Warn Bay on Bear River, Bare Island and Pretty Girl Cove”.

According to the SCT website, from 1927 to 1951, the Indian Act prohibited the use of band funds to sue the government. As a result, claims by First Nations that Canada was failing to respect its commitments were largely ignored.

Other measures were put in place to address First Nations’ claims, but the processes were slow-moving.

The Specific Claims Tribunal (SCT), established on Oct. 16, 2008, is part of the federal government’s Justice at Last policy and joint initiative with the Assembly of First Nations aimed at accelerating the resolution of specific claims in order to provide justice for First Nations claimants and certainty for government, industry and all Canadians.

When Ahousaht was notified by letter from the Ministry of Aboriginal Affairs on Dec. 30, 2014 that the government would not accept Ahousaht’s Additional Land application, they elected to go through the Specific Claims Tribunal process.

The SCTA has established an independent tribunal comprised of superior court judges with the authority to make binding decisions on the validity of claims and compensation awards, to a prescribed maximum of $150 million per claim.

The hearing is being held at Ahousaht’s Thunderbird Hall. The Ahousaht Ha’wiih and speakers were there to demonstrate to the judge and counsel Ahousaht’s form of governance.

Proceedings began when David Frank told the lawyers and other visitors that their beach keeper, +akis^s#i%a (Chief John Keitlah Jr.) welcomes them to Ahousaht.

Tyee Ha’wilth Maquinna (Head Chief Lewis George) had his family members open an ornately carved hupakwanim box that was placed prominently in front of the judge’s bench. Behind the bench was a brightly coloured chief’s curtain.

Frank explained to the visitors that the box and its contents represent Ahousaht governance; what it contains represents the holdings and powers of Maquinna. It is not only representative of holdings such as land but also access to and use of resources contained within his hahulthi (territory). These things, he said, are gifts from the Creator.

Chief Councillor Greg Louie told the guests that Ahousaht has been here for many thousands of years, looking after the territory and managing the resources. “This land has always been ours,” he said.

Maquinna was sworn in as the first witness, stating both his ‘European’ name and his Ahousaht name.

Stan Ashcroft, counsel for Ahousaht, asked Maquinna to describe his title and role but Maquinna told him that he could not speak about himself due to cultural protocols, but was willing to speak of his late father’s role and what he learned from his father.

Earl Maquinna George was Ahousaht’s previous Tyee Ha’wilth. He passed his seat/title to his son shortly before his passing.

Maquinna told the court that he learned Ahousaht history and teachings from his father and also from Ahousaht chiefs and elders that took part in treaty meetings and fisheries court cases.

He shared what he knew about Ahousaht’s war in the early 1800s with Otsosaht, the people that inhabited the present day Maaqtusiis, the Ahousaht village on Flores Island. The Ahousaht people lived on and around Vargas Island. Their chief declared war on Otsosaht after repeatedly being refused access to fish in the rivers of Otsosaht territory.

The war lasted 13 years with Otsosaht being defeated. Maquinna explained that the Ahousaht claimed Hisnit, Sydney Inlet, all of Flores Island, the Atleo and Megin Rivers all as spoils of war and through amalgamation with other tribes.

He described for the court homes the Ahousaht people had scattered throughout the territories including Blunden Island, just off of Vargas Island. Those houses, he said, were burnt down and the land expropriated.

He called government’s offers to date a slap in the face. “We keep having to go to court to fight for our right to fish,” he added.

Maquinna says Ahousaht is now in a war with the federal and provincial governments because of their lack of understanding of who owns his hahulthi.

“It would be a good day for Ahousaht if the feds and the province would start to recognize what actually belongs to us,” said Maquinna.

Much of the expropriated land in question at the hearing now sits in provincial parks and protected areas. Maquinna said that Ahousaht does not recognize these created parks because they were never consulted about it.

“Millions are being made (off of tourism) off of our territories for others,” Maquinna testified. “In order to live in harmony we need consultation; we can’t be beggars in our own land.”

“He asked the court why are we having to convince you that it is ours?” Louie shared.

The elder went on to say that he is tired of having to try to prove to governments over and over again that this is Ahousaht’s land, that it belongs to the ha’wiih.

“When he was done testifying, he hung his head,” Louie told Ha-Shilth-Sa.

The hearings wrap up in Ahousaht on Friday, May 3. Louie expects the entire process to take time; saying that they expect the crown lawyers will counter the week’s testimony with rebuttals.

A win for Ahousaht would mean that the federal government acknowledges that these lands are and always has been Ahousaht’s, said Louie. If this process does not end well for Ahousaht, Louie expects there will be an appeal. 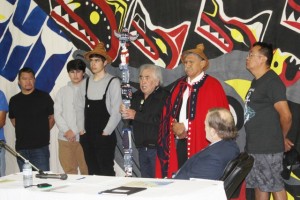 Ahousaht Ha’wiih carry out protocols at the start of the Specific Claims Tribunal held in Ahousaht Apr. 30 to May 3. Elder David Frank explained to the Judge who the Ha’wiih (chiefs) are and what is rightfully theirs. From left to right: Chief John Keitlah Jr., the two grandsons of Maquinna, Harold Little Sr., speaker for Maquinna, Tyee Ha’wilth Maquinna (Lewis George) and Judge William Grist. (Denise Titian photo)