Dionne Watts holds a picture Chantel Moore on June 18. Hundreds gathered before the B.C. legislature to mark the passing of the Tla-o-qui-aht woman, who was fatally shot June 4 in New Brunswick during a police wellness check. (Eric Plummer photo)

Two weeks after Martha Martin lost her daughter to a police officer’s gun in New Brunswick, she stood before hundreds on the other side of Canada at the B.C. legislature, calling for answers.

“We are going to make noise,” said Martin, overcome with emotion. “It’s not fair that I will never get another ‘Good morning, do you want to go for a coffee?’ All because in a split second a policeman wanted to pull his trigger. How do you connect the pieces from here?”

Many across Canada are struggling to understand what happened to Chantel Moore, a 26-year-old member of the Tla-o-qui-aht First Nation who was fatally shot when a member of the Edmunston Police Force visited her home to check on her well being. During the event in Victoria on Thursday, Martin recounted the bizarre and harrowing hours that began June 4 in the small Maritime city.

“At about 2:30 a.m. I was woken up to a banging on my door,” she said, adding that a police officer was there, voicing concern for Moore. “He told me they were concerned about her well-being, and that they needed her address. So I gave that policeman my daughter’s address, only to have them come back and knock on my door at 4:19 a.m. to give me the horrific news of what would forever change our lives.”

The Edmunston Police Force stated that Moore attacked the officer with a knife, causing him to shoot her in self defence. But Moore was shot five times, and with unanswered questions surrounding a tragedy that was intended to be a wellness check, the case is now in the hands of the Bureau des enquêtes indépendantes, an independent agency that investigates fatal police shootings in New Brunswick. The province has also announced that a coroner’s inquest will also be held into Moore’s death.

“What the hell happened here?” asked Don Tom, vice-president of BC Union of Indian Chiefs, to the crowd. “The justice system is broken. We cannot allow this to happen.”

Eddie Frank is among the dozen family members who ventured from British Columbia to join Martha Martin in New Brunswick after her daughter’s death.

The event began with five minutes of silence to mark the number of times Moore was shot during the wellness check. Several speakers expressed sadness and anger over continued cases of missing and murdered Indigenous women in Canada.

“I was really angry today, and I still am angry,” said Tom. “If you’re like me, I don’t feel like I fit in this country. Sometimes it feels like there’s no room for us.”

While speaking to media outlets before the public event began, Joanne Manley walked up to Martha Martin to give her yellow flowers, matching the shirts the family wore in recognition of Chantel’s favourite expression, ‘Stay golden’.

“This is awful…I don’t blame her for going to the door in the middle of the night and being afraid,” said Manley of the tragedy. “I can’t imagine what I would feel if my son was shot like that.”

The Victoria resident’s relationship with Nuu-chah-nulth dates back to the 1990s, when she was arrested for standing against old growth logging in Tla-o-qhi-aht and Ahousaht territory.

“When I sing O Canada, I sing ‘Our home and stolen land’,” said Manley. “We have to change people’s attitudes.”

The gathering ended with performances on the legislature steps by several Vancouver Island First Nations, including an assembly of Nuu-chah-nulth-aht. Their singing began with words from Martin Watts. 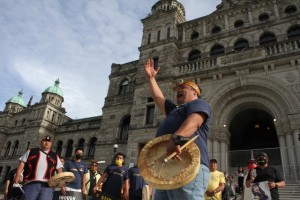 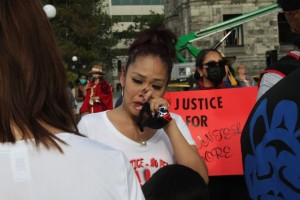 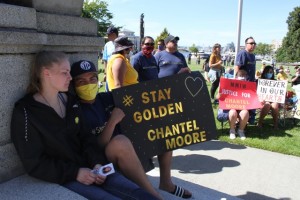 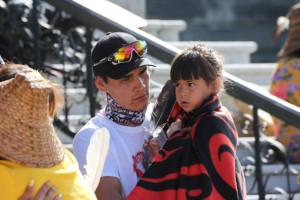 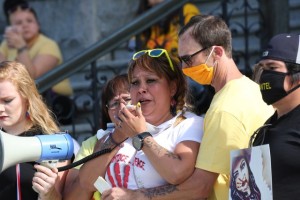 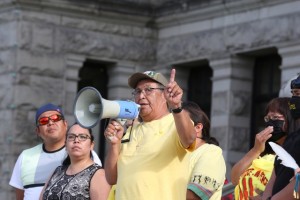