Bouquets of yellow roses and daisies were released ino the Somass River on Saturday as the service for Chantel Moore wound down, a symbolic means of loved ones letting her go. Moore was fatally shot by a police officer in New Brunswick on June 4. (Denise Titian photos)

A lone eagle frolicked with the seagulls over the Somass River, feasting on the jumping salmon as mourners gathered on the riverbank to say their final farewell to 26-year-old Chantel Moore.

Martin Watts organized the event, which took place on the afternoon of June 20 at Papermill Dam park in Port Alberni.

“This was her favorite place to be, she would bring her daughter down here to swim or just to hangout,” he told Ha-Shilth-Sa.

More than 100 people were spread out over the lawn, seated on their own chairs. A loudspeaker was set up so that people could hear the speakers. Canopies were also set up to protect mourners from the occasional summer rain showers.

White, fluffy eagle down drifted on the breeze as Robert Watts performed a prayer chant. He welcomed the people on behalf of Tseshaht Ha’wiih before joining singers as they performed two of the Ha’wiih’s songs.

Martin Watts told the crowd that he thought it was important to do something for Chantel in Tseshaht territory because she lived there for six years. He told a story of how Chantel came to Port Alberni in the early stages of her pregnancy when she met Sebastien Fred. The young Tseshaht man took baby Gracie as his own.

Watts went on to say that Chantel spent two years in his house when she began a relationship with his son Deion.

“It is important to help out because she was family,” said Watts. “She was a loving happy person,”

Chantel eventually sent Gracie to live with her mother Martha in New Brunswick, but she missed them.

“It was just before Christmas when she left for New Brunswick; it hurt to see her go,” said Watts.

But he said that his son and Chantel remained best friends, talking to each other every day.

“He’d probably have a lot to tell the police; he spoke to her just an hour before the incident,” said Watts.

MP Gord Johns attended the memorial, and stressed that he will be there to stand in solidarity with the Martin family as they seek truth and justice about what happened to Chantel.

“I have been friends with Chantel’s mother Martha for 23 years,” he said. “Gracie (Chantel Moore’s 6-year-old daughter) shouldn’t be here this way, saying goodbye to her mother.”

Johns called it a senseless loss of life that should never have happened, vowing to bring their message to the decision makers in Ottawa.

“We will demand action,” he said.

Joe Martin thanked Tseshaht for what they did for his granddaughter Chantel.

“My family went [to New Brunswick], what we saw and what we heard – it was horrific,” he said. “I never want what happened to her to happen to any of you.”

Martin said he believed that they were being followed by the police when they were in New Brunswick, “and it turns out they were following us,” he said.

With his quavering, Joe Martin described the police officer who shot Chantel.

Moore was petite, less than half that weight.

He thanked Johns for always being there for the family, always on the other end of the phone line.

“I want justice for that young girl,” said Martin.

Bouquets of yellow roses and daisies were released at the rapids as the service wound down. Watts said this was their way of symbolically letting her go.

Those closest to Chantel, including her mother and daughter, entered the water to be refreshed as the flowers drifted past. A family member stood in the water with them, shaking a rattle to his prayer chant as the group plunged into the water, sobbing with grief.

The group emerged from the water looking stronger. 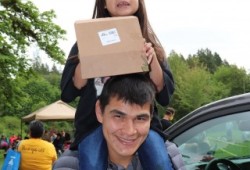 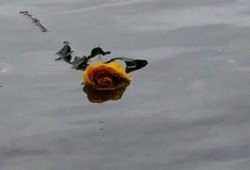 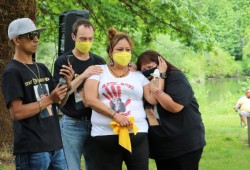 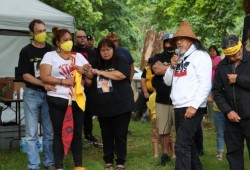 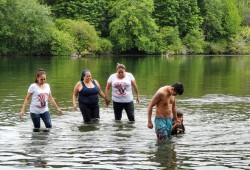 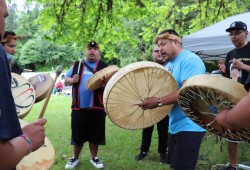