At the age of 80, Ray Williams has lived in Yuquot for the majority of his life, and has the last household to remain in the ancient Mowachaht village site. On July 16 he was celebrated in the House of Unity near Gold River. (Eric Plummer photos)

While Canada struggles to come to terms with its colonial past, the life of Ray Williams serves as a critical reminder of the old world that rapid development took for granted – and what teachings should be preserved for future generations.

As the patriarch of the last family to remain in Yuquot, the ancestral home of the Mowachaht tribe on the southern tip of Nootka Island, the Williams family still hunt and eat seal. Ray recalls the trick of using the ocean’s horizon line as a guide while leveling a window frame on his house. When aligned correctly from the certain spots on the ocean, mountain peaks serve as markers for the best fishing spots in the area, an old trick Ray learned from his forefathers.

“The landmark is marked by the top of a mountain,” he said while sitting in his home one rainy morning in May. “My boys know it now…we still use it today.”

In the interest of moving the community to an area less isolated from the rest of the province, in the late 1960s the government began relocating members of the Mowachaht/Muchalaht First Nation from Yuquot to a reserve on the shore of Muchalaht Inlet, south of Gold River. The Nootka Island community gradually thinned out as families took offers to move to a more modern environment. But Ray’s family never left, eventually becoming the last to reside in the village where archaeological excavations have uncovered evidence showing 4,300 years of human habitation.

As a small child Ray was taken from Yuquot to attend Christie Indian Residential School. As an adult he wasn’t willing to trust what the Canadian government was proposing, even if the repeated offers eventually entailed a new house for his family.

“Oh, my goodness, they were tempting,” said Ray of the offers to relocate. “I said no again. ‘No, I want to stay here.’”

Now at the age of 80 with failing eyesight, Ray sees more support from people knowing that he will never leave Yuquot, recognizing the importance of his family remaining in the village amid the transformational changes of the last 50 years.

“My uncle is the last sibling of all his brothers and sisters,” said Ray’s niece, Marge Amos. “The teachings and the values aren’t gone. It’s up to us to carry them forward.”

After more than two years of living under the restrictions of the COVID-19 pandemic family members believed it was time to celebrate the life Ray has lived. On Saturday, July 16 a gathering was held in Tsaxana, filling the Mowachaht/Muchalaht First Nation’s House of Unity.

“It was a total surprise. Nobody was to leak it out to him,” said Amos, mentioning a story related to the upcoming occasion of Pope Francis visiting Canada. “Darrell told him that it has to do with the Pope.”

After being brought down Muchalaht Inlet to the First Nation’s community by Gold River, Ray had no idea what was waiting for him.

“We had him walk into the hall, and we were all standing there waiting for him. They sang a song as he walked in, and he started crying. He hadn’t seen some of the family for three, four years.”

“It’s like a celebration of life, to recognize him as a humble man, because of the things he’s done in his life, now we want to share that through wisdom and through knowledge,” said Ray’s nephew, Paul Lucas, who came from Hot Springs Cove for the event. “We are here today to appreciate who he is, not what he is. A humble man.”

The big house vibrated with singing and drumming, as the floor filled with dancers. Speeches filled the afternoon and evening with acknowledgments of family connections.

“I want to thank our uncle for taking care of Yuquot,” said Brian Lucas Sr. before the crowd. “He’s important.”

With a strong tradition of relying on large gatherings to practice ancestral culture and fortify family ties, the COVID-19 pandemic and it’s related social restrictions were particularly hard on Nuu-chah-nulth communities. Although Ray was never alone, Yuquot was often quiet. During this period Terri Williams passed away in the fall of 2020, Ray’s partner of almost 60 years.

“You’re still here because you have a reason to be here,” said Amos, thinking of her uncle. “Everyone you see in this hall tonight were going through lots through the COVID. A lot of them needed that uplifting. One of the things the old people say is, ‘You never fear sickness, you never be scared of it, because if you get scared of it, you’re going to attract it.’ You always know you’re going to be okay.”

“Respect yourself so you can respect others,” added Lucas. “So I come here today to show my respect to my uncle.”

With his relatives surrounding him, Ray was overcome with emotion.

“Oh, what a surprise, I felt like a king,” he said. “It’s a lot better than winning a million dollars.” 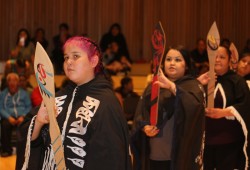 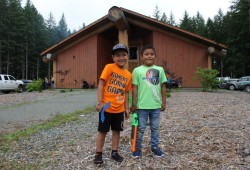 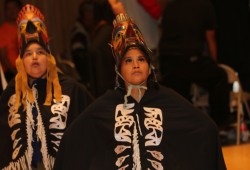 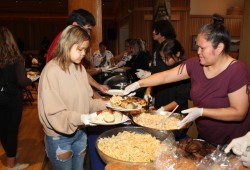 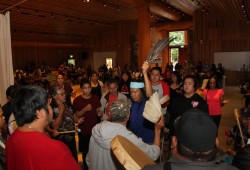