Tseshaht brings a new rendition to an old community space

A new Somass Hall will be built by the Tseshaht First Nation just a few years after the last building was torn down.

The original Somass Hall provided the community with an ideal gathering place for feasts, ceremonies, weddings and much more. The new project received $3.4 million in funding from the Investing in Canada Infrastructure program, covering about 75 per cent of the its costs, while the other 25 per cent is covered by the Tseshaht First Nation itself.

Aside from the historical importance, Tseshaht Elected Councillor Deb Foxcroft says the new Somass Hall will fill a major gap in the community. The original Somass Hall had been torn down in 2019 due to the building being deemed unsafe. In the time since the original building closed, gatherings weren’t as frequent or needed due to pandemic-related complications, but, in 2022 the need for a community space is back.

“There were so many feasts happening there, and naming ceremonies and weddings,” said Foxcroft. “My parents got married there, even funerals, significant historical meetings - not only with Tseshaht, but with the Nuu-chah-nulth Tribal Council. I know the treaty negotiation actually started in that building with the 14 nations. It really was a hub for not only our (Tseshaht) community, but for Nuu-chah-nulth.”

When the original Somass Hall closed, a sizable ceremony was held to say goodbye to the building where so many formative memories came to be. Tseshaht First Nation councillors made sure to hold onto a few important items at that ceremony, so that one day they could bring them to the new building.

The new Somass Hall is expected to be fairly similar to the original, but with a few changes, according to Foxcroft. The estimated 7,000-square-foot building will bring a more modern style while still holding onto the same charm and history that came with the original. In terms of fresh additions, the new Somass Hall will feature a basement with space for meeting rooms, offices, and community programs.

“We were only allowed to build roughly the same size of building as what was already there before,” explained Foxcroft.

“We haven't, you know, built a significant infrastructure for a long time in our communities, most of our buildings are fairly old,” she added. “A lot of our community members have dance practices for potlatches and such, and there's not really any space at this point for those kinds of things. And so, this is significant project for our community.”

The timing of the Tseshaht First Nation getting the ball rolling towards building a new Somass Hall is very significant. According to Foxcroft, between pandemic related complications and dealing with some difficult history, this is just the boost that the community needs.

“Since COVID and the pandemic, we haven't been able to gather like we used to,” she said. “And just in terms of working on some difficult things with the Alberni Indian Residential School, what we’re doing now is very uplifting, because we now can see hope for ourselves in our community.”

Construction on the new Somass Hall doesn’t have a definitive completion date just yet, but it is expected that construction could take up to a few years. 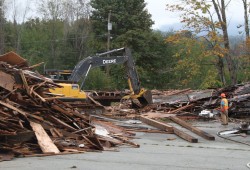 Fun in the Park gathering brings 150

Northern Region Games foster self discovery away from modern distractions