The newly painted orange bridge was vandalized with a racist slur in Port Alberni during the evening of Sept. 30, after the city saw an outpouring of support on the second annual National Day for Truth and Reconciliation. The vandalism was soon cleaned up, but leaders are taking the incident as a sign that more work is still needed to improve intolerance in the community. (Port Alberni RCMP photo)

In a small city that can be seen as a microcosm of Canada’s movement towards reconciliation with Indigenous peoples, Port Alberni’s residents poured onto its streets Sept. 30, clad in orange to mark the day of recognition.

But during the evening of the second annual National Day for Truth and Reconciliation, a collective spirit of understanding and support became tainted when an “Every Child Matters” slogan painted on a Port Alberni landmark was vandalized with a racist slur.

Just days earlier former students from the Alberni Indian Residential School and children currently attending Haahuupayak Elementary painted parts of the bridge across the Somass River, leading to the Tseshaht First Nation’s reserve. Sections of the structure are now orange, recognizing the colour worn to honour survivors of the assimilationist practices of the residential school system, complete with the slogan across the bridge’s roadside barrier.

Coincidentally, many locals still refer to the structure as “The Orange Bridge”, recalling its colour for decades before being painted grey in 1990.

Hundreds crossed the newly painted Orange Bridge on Sept. 30, reaching the nearby former site of the Alberni Indian Residential School for a gathering to complete the cross-city walk for reconciliation. But by 10 p.m. that evening Tseshaht Chief Councillor Ken Watts began hearing reports that the bridge slogan had been vandalized.

“Although this type of act does not come as a surprise to many, it is a sad reminder of the depth of work we, as a community and broader society, have in front of us to eliminate racism,” reads a statement released by the First Nation the following day. “Our Nuu-chah-nulth teaching of ḥačatakin c̓awaak reminds us that everything is one and all is connected.”

As a child, Wally Samuel attended AIRS. The Ahousaht elder took part in painting the bridge orange before the national day of recognition.

“It’s sad that somebody vandalized that, we’re not blaming any race or anything, it’s just some idiot individuals,” said Samuel, noting that Port Alberni has become a more accepting community than it was in the 1950s and ‘60s. “There’s still some idiots out there, but it’s up to us to educate them and still act respectfully.”

The Port Alberni RCMP are investigating the vandalism and ask the public for any information about the culprits.

“Senseless acts such as this are unacceptable and troubling to our community, and revert the efforts towards truth and reconciliation,” stated Const. Richard Johns, RCMP media relations officer. “Although this crime was not reported to our detachment officers are actively investigating any available leads.”

Over the weekend the incident made national news, giving bad publicity to a city that has worked in recent years to overcome an intolerant past. A.W. Neill was Alberni’s MLA around the turn of the century, followed by being elected mayor in 1916 and serving as member of parliament for Comox-Alberni from 1921-1945. The long-time federal representative also served as an Indian Agent, enforcing the assimilationist laws of the Indian Act in the region, and advocated for the internment of Japanese-Canadians during the Second World War. Meanwhile on the west side of the Somass River, a residential school took in First Nations children from across coastal and central B.C. for nearly a century.

In a statement on her Facebook account, Port Alberni Mayor Sharie Minions condemned the vandal’s racist actions, emphasizing a need for the community to stick together.

“While we have made great strides, this act shows how much work there still is to do within our community. Reconciliation, relationships, learning and understanding have never been more important,” wrote Minions.

Community members, both Indigenous and non-Indigenous, came to the site to clean up the vandalism, and by the time the sun hit the Orange Bridge on Saturday the slogan was restored to its original state.

“Survivors felt it would be fitting to paint the bridge orange to symbolize resilience, hope for the future and to raise awareness of the impacts of residential schools so that the pain they’ve endured never happens again,” stated the Tseshaht.

“We’ve got to be ready to share our story,” said Samuel, noting that some of his schoolmates are still unable to cross the bridge. “They knew crossing that bridge meant heading to the residential school.”

Following a wave of investigations into burials at former residential school sites, the Tseshaht undertook radar scanning this summer for unmarked graves where AIRS once stood, the first phase being completed Sept. 23. Meanwhile the First Nation brought forward the idea of painting the bridge to their working group of residential school survivors, in an effort to ensure the children who attended the institution won’t soon be forgotten.

Costs for the project seemed quite high at first according to Watts, but things came together after some discussion and planning with the B.C. Ministry of Transportation and Infrastructure. Initially the idea was to paint the entire bridge, but with the Somass being a salmon bearing river, painting the bases around the bridge emerged as the safer compromise.

The ministry took their support a step further and donated the orange paint and roadside flaggers for the day.

“The ministry is grateful to have had the opportunity to partner with the Tseshaht First Nation and Mainroad Mid Island to add orange to the Orange Bridge as a way of honouring residential school survivors and all those who did not survive,” said Public Affairs Officer Gene Law on behalf of the Ministry of Transportation and Infrastructure.

With a little help from Tseshaht and the custom print shop Billybeauty to make the “Every Child Matters” sign, the job was done. This gives the community and tourists passing through a lasting reminder to remember the children taken from their families and sent to residential schools.

“Seeing survivors and children paint was amazing, it was a day that I'll never forget,” said Watts.

For Wally Samuel, reconciliation means people from different backgrounds learning how to better understand each other and live together.

“It’s getting better because our kids are growing up with other nations,” he said, adding that reconciliation amongst First Nations is part of the movement as well. “We have to reconcile with everybody. We had a lot of tension between our own nations before, between families.”

“No matter what race you’re from, we’re all human beings and we’ve got to work together to make a better safer place for everybody,” added Samuel. 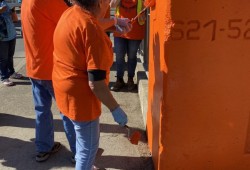 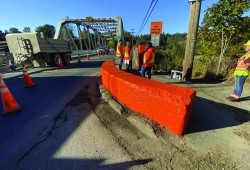 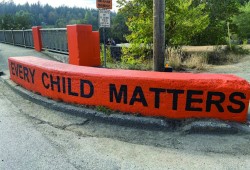