Pacheedaht First Nation has signed a Memorandum of Understanding with Teal Cedar Products Ltd. that they hope will build on an existing relationship between the nation and the company. Chief Jeff Jones says the MOU, signed Sept. 8, will facilitate dialogue between the parties allowing them to explore economic development opportunities while balancing PFN interest in stewarding the lands water and resources of its territories.

“It’s been a long time coming,” said Jones, adding that various forestry companies have had ownership of TFL 46 for seven or eight decades, mostly leaving PFN out of management decisions.

The Teal-Jones Group, a forestry products company based in Surrey, BC, is proud of its relationships with its Indigenous partners.

“Teal Jones has a history that includes productive working relationships with 106 First Nations in B.C. Each relationship we form reflects the distinct interests of the individual First Nation,” they state on their webpage. “We believe that it is of paramount importance to work closely with our Indigenous partners to ensure your Nations’ success as well as our own. Economic and social wellbeing are our goals.”

The MOU aims to bring the parties together to create a framework agreement to “facilitate dialogue and identification of opportunities for economic development in balance with continued stewardship of the land, water and resource on Pacheedaht First Nation traditional territory,” reads the joint press statement.

“This (MOU) will give us a say over the territories of our hereditary chief, Frank Jones,” said Jeff Jones.

Forestry companies have been harvesting Pacheedaht territories for about 80 years, Jones estimates. He said he is grateful that the major players came to a form of understanding regarding Pacheedaht interests in forestry in their territories.

“This partnership builds on the existing relationship created over the years, and we will work together for the betterment of both sides,” said Jones.

80 per cent of Fairy Creek watershed is protected

Jones says the agreement will maintain Pacheedaht cultural values, such as protecting stands of old growth cedar. According to Jones, about 80 per cent of the Fairy Creek watershed is protected under their Integrated Forestry Management Plan.

“One hundred, two hundred…four hundred years down the road our Pacheedaht people will have access to old growth cedar; we have areas set aside for canoe logs,” said Jones.

He went on to say that the parties are working to maintain the integrity of forest resources for future generations in TFL 46.

The village of Port Renfrew grew up as a logging community. It was forestry companies that brought houses in for their workers to raise families.

In recent years, Pacheedaht built a sawmill to create local jobs by milling the raw materials they have in their territory. The mill is capable making beams as long as 60 feet, according to Jones. But it needs old growth logs or mature second growth to operate.

“We have a cedar strategy that involves all tenure holders in our territory and we have a log market agreement with Teal – we purchase logs from them for our mill,” said Jones.

“Today, we have five people working at the sawmill,” he added.

With the signing of the MOU, Pacheedaht people will have opportunities to train or work in all aspects of forestry management.

“From identifying culturally modified trees, silviculture to mapping – maybe we’ll even have land guardian presence so our youth can learn about their territories,” said Jones.

According to Jones about 70 to 80 per cent of TFL 46 is in Pacheedaht territory.

“Our goal is to have as much ownership in our territory as possible,” he said.

The nation is taking steps in that direction starting with the purchase of local fee-simple lands, including Browns Mountain. The vision is to eventually move Pacheedaht people out of the low-lying tsunami zone up the mountain.

A quiet year for protestors

As for the anti-logging blockades, they did not have a presence in Port Renfrew in the summer of 2022. The Rainforest Flying Squad have set up encampments at the side of the road leading up to the Fairy Creek watershed for the past two years. The Teal-Jones Group filed a court injunction to have the blockades removed and over 1,000 arrests were made in 2021 as activists were removed by the RCMP.

Reports say that nearly 1,200 activists were arrested in the blockades.

“Pacheedaht has respectfully asked them to leave several times and we committed to the two-year deferral and to get our Integrated Forestry Management Plan up and running,” said Jones.

According to the provincial government, the Ministry of Forests is working in partnership with Indigenous nations to defer logging activity within 2.6 million hectares of B.C.’s most at-risk old growth forests.

Included in the deferral process is 1,119 hectares of the Fairy Creek Watershed, 884 hectares of which is designated old growth.

“Approved short-term deferrals will help protect and support these ecosystems while First Nations, the province, and other partners develop a new approach for old growth forest management,” according to the BC Ministry of Forests website.

Grateful that they are gone, Chief Jones says there is no reason for protestors to occupy Pacheedaht territory.

While groups are currently not blockading in the First Nation’s territory, they have changed tactics. Environmentalist activist Joshua Wright claims to have found a rare lichen called Oldgrowth Specklebelly on Sept. 13, near Port Renfrew on the Bugaboo Main logging road. He says there are only 56 documented findings of this unusually colored, pale green-blue species of lichen in Canada.

Wright documented five host trees and forwarded the information to the government, hoping they will offer some protection through its commitment to biodiversity conservation.

The Rainforest Flying Squad states that the future of the lichen now hinges on the provincial government’s decision to approve the cutblock. In a press release the group said, “Scientists fear the province will fail to adhere to its own management plan to protect the rare lichen.”

Trevor Goward, a lichenologist who named the Oldgrowth Specklebelly and assisted the B.C. Ministry of the Environment with its management plan of the species, questions how the cutblock could have been approved by Teal-Jones for logging.

“How is it possible that an in-your-face lichen like Oldgrowth Specklebelly, a species listed under Canada’s Species-At-Risk Act, went under the radar?” he said in the Rainforest Flying Squad’s press release.

Jones said Pacheedaht will consult with a professional biologist to investigate the lichen’s presence in the cutblock. Based on the findings of their biologist, the nation will make decisions on how to proceed.

“If a rare lichen species is found in our territory, it will be included in our Integrated Resource Management Plan to ensure responsible stewardship of at-risk species and ecosystems within our nations’ traditional territories,” he said.

Chief Jones called the MOU a step in the right direction.

“Revenue from forestry partnerships bring local benefits,” said Jones, like annual Christmas disbursements to members and funds to purchase fee-simple properties for the benefit of all Pacheedaht people. “This agreement provides a respectful understanding and that’s what’s important to Pacheedaht.” 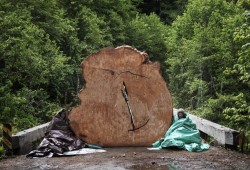 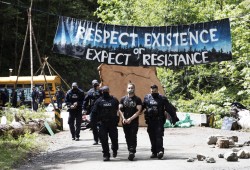 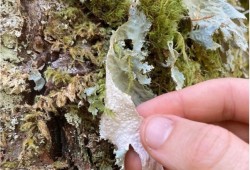