The area being cut in B.C. has declined by 42 per cent since 2015, says the province, but this is not necessarily a good thing for all involved in what is considered British Columbia's foundational industry.

One year after an advisory panel warned that a large proportion of B.C.’s oldest forest is at risk, the province is reporting the lowest levels of old growth logging on record.

But how the provincial government protects trees that have stood since before the industrial era took hold has drawn dramatically mixed reactions across British Columbia. From forestry dependent families fearing how they will sustain themselves in the future, to those determined to risk arrest in saving what old growth is left, any policies on managing the province’s oldest trees are destined to bring controversy.

In early November B.C.’s Ministry of Forests released records showing a steady drop in old growth harvesting, from 65,500 hectares logged in 2015 to 38,300 hectares cut in 2021. The government states that the area logged last year represents 0.3 per cent of the 11.1 million hectares of old growth that still cover parts of B.C. Old growth is typically defined as trees older that 250 years old on the coast, and 140 or more years old in B.C.’s Interior.

“The latest numbers show that B.C. is on the right track as we work to develop and implement new long-term solutions for better managing, preserving and sharing the benefits of our forests,” said Minister of Forests Katrine Conroy in a press release.

One year ago a technical advisory panel of experts assembled by the province released recommendations on how to best manage old growth in B.C., citing that four million hectares of this forest is at risk of permanent biodiversity loss. The panel advised that 2.6 million hectares of old growth should be immediately deferred from harvesting.

Seen as another challenge imposed on a fundamental industry for British Columbia, news of the deferrals sparked protests across the West Coast. Hundreds of forestry workers and supporters held up Port Alberni’s main thoroughfare, outside of the office of MLA Josie Osborne, in a rally that was one of several held in Vancouver Island cities in late 2021.

The union representing many of B.C.’s forestry workers warned that economic devastation would hit communities.

“If even half of the 2.6 million hectares identified by the government are removed, jobs will be lost as multiple sawmills, value-added operations and pulp mills close permanently,” said United Steelworkers Wood Council Chair Jeff Bromley in a press release from Nov. 3, 2021. “In the past three years, eight operations with USW workers across B.C. closed and 1,000 good-paying, family supporting jobs were lost. The impact from this process will almost certainly multiply across the province.”

The deferrals were contingent on consultations with First Nations in whose territories the protected old growth is situated, part of a vision that Indigenous communities be “full partners in sustainable forest management,” said Conroy.

In recent years the Huu-ay-aht First Nations have claimed a growing stake in the industry around Port Alberni, including the formation of C̕awak ʔqin Forestry, a partnership between Western Forest Products and the First Nation’s Huumiis Ventures. C̕awak ʔqin manages tenure over Tree Farm Licence 44, a 137-hectare section of Crown land south of Port Alberni and Great Central Lake. The company has committed to retain 96 per cent of old growth forest in TFL 44.

Maps provided by the province identified a total of 14,754 hectares in Huu-ay-aht territory to be protected, following guidance from the technical advisory panel. The First Nation agreed to the panel’s deferrals - except 645 hectares in which harvesting is needed to continue forestry operations. Halting this cutting over the following two years would put the First Nation’s forestry operations in “serious jeopardy”, resulting in “significant economic harm” for Huu-ay-aht citizens, Bamfield and the Port Alberni region, said the First Nation.

“These deferrals would have an impact on small portions of many different harvest areas in a variety of ways, including making entire harvest areas uneconomic or inaccessible or making the deferred portion subject to forest health concerns such as windthrow,” read a Dec. 1, 2021 statement from the Huu-ay-aht.

As the majority of the deferrals are in place elsewhere in B.C., significant economic harm has become inevitable. The provincial budget released in March predicted a 12 per cent harvest decline over the following three years. With approximately 50,000 people still employed in forestry, this translates into a forecast of 4,500 lost jobs.

On Vancouver Island, this trend already appears to be taking effect. In November Western Forest Products shut down its Alberni Pacific Division Sawmill for six months, citing a shortage of timber supply and putting over 100 people out of work. Meanwhile, raw logs are shipped overseas from the port next to the curtailed sawmill, much of this harvested from privately owned land and destined for manufacturing in Asia.

On the other side of the island, Paper Excellence announced that paper operations at its Crofton mill would put on hold in December, while pulp processing continues.

The United Steelworkers fear that the government has listened too closely to the protest movement, as the union claimed that four of the five technical advisory panel members have direct ties to the Sierra Club.

“Some of the environmental movement has been strategically misleading the public for years with false claims about the forest industry and it appears the government is now willing to cede forest policy to the very same groups,” said Bromley in a USW press release. “There has to be a better, unbiased approach that is based on the science.”

In September 2020 the province released the Old Growth Strategic Review, compiled from provincewide consultations held by two veteran foresters: Al Gorley and Garry Merkel. The review stated that B.C. is in the midst of a “paradigm shift” in how the public views ancient forests, a transition from a human-centric view of old-growth to a belief that these forests are valuable to all living things. The review stresses that Indigenous people are destined to be “key players” in how old-growth forests are managed.

The old growth review includes recommendations for how the provincial government manages B.C.’s forests in the coming years, including more involvement from Indigenous communities and “prioritizing ecosystem health and resilience”.

“There are some areas of the province where failure to act now could lead to the permanent loss of rare or unique ecosystem components contained in old and ancient forests,” stated the review. “[A]ny of these stands that are intended for harvesting or other significant disturbance should be deferred from development.”

Meanwhile, a movement on southwestern Vancouver Island was in the early stages of what would prove to be the largest act of civil disobedience in British Columbia’s history. Since August 2020 blockades had been growing around the Fairy Creek watershed to block logging companies from accessing the area. A continual stream of supplies and volunteers fed the encampments, as the “forest defenders” feared road building into one of few watersheds on Vancouver Island that remained untouched by industrial logging.

The Rainforest Flying Squad emerged as the group behind this coordinated movement, with Pacheedaht elder Bill Jones serving as a spokesperson for blockades in his First Nation’s territory. In an interview with Ha-Shilth-Sa from August 2020, Jones recalled hunting in the Fairy Creek valley as a young man amid the massive stands of yellow and red cedar, while his uncles used the undisturbed area for prayer and other spiritual practices.

“There’s a lot of yellow cedar in the Fairy Lake watershed, which is a revered and respected spiritual tree for our people, along with the red cedar,” he said, noting that a road was being built towards a particularly old tree. “The road is going directly to a yellow cedar that a forester estimated to be about 1,500 to 2,500 years old. They are aiming the logging road right straight to the tree.”

Over the following months thousands joined the encampments, blocking access into the valley that Teal Cedar Products holds a Crown tenure over. A court-ordered injunction against the blockades was issued, and by May of 2021 RCMP descended upon the remote area to begin enforcement. By the end of year over a thousand arrests were made.

As the protests on southwestern Vancouver Island escalated, local First Nations governments and hereditary chiefs became frustrated with the presence of encampments in their territories. In June 2021 the Pacheedaht, Ditidaht and Huu-ay-aht First Nations announced the Hišuk ma c̕awak Declaration, asserting authority over their respective territories on southwestern Vancouver Island. Along with the declaration, the three Nuu-chah-nulth nations called for an immediate two-year deferral of all old growth logging in the Fairy Creek and central Walbran regions, allowing the First Nations to assemble their own forest stewardship plans for the areas.

Since then the Pacheedaht have made a memorandum of understanding with Teal Cedar Products. Signed Sept. 8, 2022, the MOU entails exploring economic opportunities for the parties while managing resources in Pacheedaht territory. The First Nation owns a sawmill in Port Renfrew, and sees the MOU as progress beyond being left out of forestry decisions in its territory for decades.

Further north on the coast towards Barkley Sound, the Huu-ay-aht have seen the number of its members employed in the forest industry grow from two in 1995 to the current 44. Forestry now accounts for up to three quarters of revenue generated annually by the Huu-ay-aht Group of Businesses.

As other forestry companies face layoffs and mill curtailments, Huu-ay-aht Chief Councillor Robert Dennis Sr. foresees exceeding 50 members in the industry in the coming years by encouraging training and job placement. The First Nation is planning community engagement sessions for members aged 16-35 to promote career opportunities, and is working on identifying a training program through North Island College.

“We’re getting some very encouraging feedback from Canada on this, so [we’re] excited about that possibility of having an educational institution to provide forestry job-related training,” said Dennis. “Our objective is to find the workers, identify what training needs to be done.”

Opportunities are expected in various areas, including administrative, forestry planning, harvesting and mill processing. And the First Nation continues to look at starting a new sawmill at Sarita Bay for hemlock.

“That is starting to become a reality, we’re getting down to the final nitty gritty details of developing a kiln-dried operation,” said Dennis. “We anticipate that we would probably employ six people, with the intent of growing it over time.” 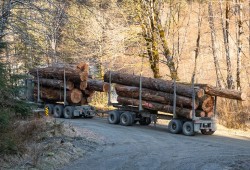 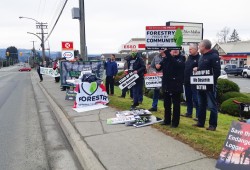 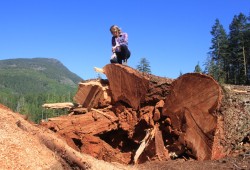 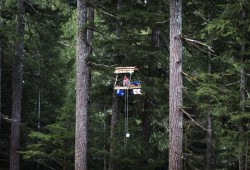 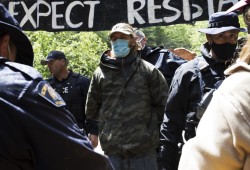 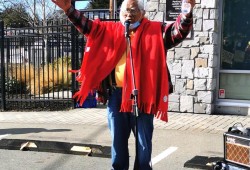 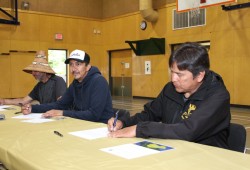