Eartha Muirhead stands with Steve Fischer at one of three blockades set up in August to block forestry access into the Fairy Creek valley. Teal-Jones has halted road building in the area. (Eric Plummer photos)

Blockades are holding the line in three locations near Port Renfrew, preventing forestry activity from entering one of Vancouver Island’s few untouched watersheds.

Fairy Creek lies within Tree Farm Licence 46, a large section of Crown land that has been held by the Teal-Jones Group since 2004.

“Teal Jones started blasting a new road on the far side of Fairy Creek, it was going to come in right over the top of the ridge,” explained Jeff, a Victoria resident at the second blockade who asked that his last name not be disclosed. “The reason we have a blockade here is that this is the other logical route to get into Fairy Creek. There is very recent old-growth falling that was happening up this road.”

According to those at the site, this initial falling included large old-growth yellow cedar trees, a species that holds important spiritual value to Nuu-chah-nulth-aht. The Fairy Creek valley is within the traditional territory of the Pacheedaht, but the First Nation has yet to speak in support or opposition to harvesting in the watershed.

However, Pacheedaht elder Bill Jones isn’t reluctant to share his opposition to the forestry activity. He recalls hunting in the Fairy Creek valley as a young man, and his uncles used the area for prayer and other spiritual practices.

“I used to go up there hunting in my young manhood and they came out of the forest behind Fairy Lake mountain and surprised me,” recalled Jones. “They used to like to go into the woods for the private solitude and the peace there.”

The region is home to massive stands of yellow and red cedar, reason enough to keep harvesting away from the valley, said Jones.

“There’s a lot of yellow cedar in the Fairy Lake watershed, which is a revered and respected spiritual tree for our people, along with the red cedar,” he continued, adding that the road that Teal-Jones began to build was directed at a particularly old tree. “The road is going directly to a yellow cedar that a forester estimated to be about 1,500 to 2,500 years old. They are aiming the logging road right straight to the tree.”

Support for the blockades has been consistent over August, with a steady flow of food, provisions and volunteers to man the posts for a few days at a time. A third blockade went up Aug. 22 to ensure logging trucks don’t gain access to the valley.

Denman Island resident Eartha Muirhead accompanied Jeff at the Granite Main blockade. They are both veterans of past movements to stop the clearcutting of old-growth trees, including an arrest Muirhead sustained in Clayoquot Sound in 1993, possibly the largest movement of civil disobedience in Canadian history.

“I think that growing up in old growth forests influences how you see the world,” commented Muirhead.  “The natural world has so much wisdom. It is who we are in essence.”

She saw someone from the forestry company come to the site on Aug. 10 to check on a road building machine on the other side of the blockade. Muirhead said he looked surprised to see people there, and although they invited him to cross the line to check on the machine, he voluntarily left.

A drive up Granite Main overlooking the other side of the mountain that forms the Fairy Creek valley gives a quick indication of why so many are concerned for the untouched watershed. Large swaths of the mountainside are clearcut, with equipment still on site.

One the other side of the cutblock, two thirds of the Fairy Creek watershed is protected as a Marbled Murrelet Wildlife Habitat Area, according to the Ministry of Forests.

“Our government is committed to protecting old growth and biodiversity while supporting workers and communities,” said B.C. Forestry Minister Doug Donaldson in a statement sent to Ha-Shilth-Sa. “When it comes to this work, there have been some strides over the past 30 years, but our government wants a comprehensive science-based approach.”

Nearly three decades since the mass arrests in Clayoquot Sound, old growth logging remains an integral part of B.C.’s coastal forestry industry. Information sent to the Ha-Shilth-Sa in July 2019 from BC Timber Sales clarified that approximately half of the timber harvested from Crown land that is auctioned annually is old growth, and will be “for the foreseeable future.”

“This is what the timber supply, economic base and community employment across the coast is based on,” wrote a spokesperson for the provincial agency responsible for auctioning sections of Crown land.

“This harvest level is sustainable for fifty years, at which point it must fall to the long-term sustainable level of 332,500 m3 /year,” states the management plan, which was drafted in 2010.

This model for a sustainable harvest has not reassured Jones.

The Ministry of Forests would not say if it will enforce forestry access to the Fairy Creek valley. For the time being, Teal-Jones has halted road construction as the blockades remain in place. 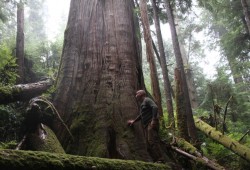 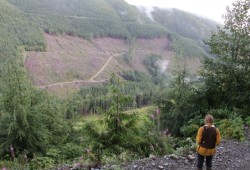