Students gather in assembly at the Alberni Indian Residential School, which was former run by the United Church. (United Church of Canada archives)

Members of the Alberni Valley United Church (AVUC) delegation have been holding monthly meetings with residential school survivors to discuss reconciliation and what that could look like for the group.

Mary Heatherington is a member of AVUC and invited Ha-Shilth-Sa to a meeting called Road to Reconcili-Action that was held April 29 at the United Church in Port Alberni.

The group started about 2019, according to Heatherington, when church members went to Tofino to meet with Tla-o-qui-aht leadership.

At one of the early meetings Tla-o-qui-aht elder Levi Martin came up with the name ?aps ciik cha chum Hiy Ap, which, he told the group, means ‘making things right’. The meetings had just gotten started but were brought to a halt due to COVID-19 pandemic restrictions.

Nora Martin said the first meetings in 2019 focused on healing and allowed the survivors to share their stories with the congregation, including the impacts of the harm that residential schools did - not only on the individuals that attended them, but also the community.

“It was different at first, letting people into our lives – it never will be easy,” said Nora, who is a residential school survivor from Tla-o-qui-aht.

Besides interim Minister Ed Lewis of the United Church, there were a few elder members of the congregation in attendance including a retired family physician joining about a dozen Nuu-chah-nulth participants.

Heatherington along with Nora Martin were there to welcome the people. The agenda for that morning included a discussion around what reconciliation means. Guests Julia Hunter and Michelle Dick from the NTC’s Usma were there to talk about the foster care program.

Minister Lewis told the people that it was hard hearing their stories at first.

“As a white person, at first I felt guilty and ashamed,” he said. “But now my heart is healing because of this group, and I thank you for that.”

One of the survivors said that she was diagnosed with Post Traumatic Stress Disorder (PTSD) late in life, due to her experiences at residential school.

“When we’re strangers we make assumptions about each other…people might think I don’t like them because of how quiet I am, but that’s just a symptom of PTSD,” she told the group.

The retired doctor recalled seeing many Indigenous patients who had illnesses not commonly found in the non-Aboriginal population. He noted the children had a lot of ear infections, that he attributed to milk allergies. Many, he recalled, suffered from rheumatic fever or psychiatric problems.

Wally Samuel, Ahousaht elder, noted that the church operated by the same principals that Nuu-chah-nulth families go by: “…being a good person, helping one another,” he said.

He recalled going to Sunday school because he liked it – it was fun.

“But residential school was different. Some people were mean. Some can’t talk about what happened. Some are in denial,” he said.

Samuel has been involved with the Port Alberni Friendship Center since its inception.

“The Friendship Center is overwhelmed with people with social problems and that’s what I’d like to see addressed,” he said, adding that he appreciates the United Church’s willingness to work with survivors. “I’d say the priorities are social services, housing and counselling.”

Nora shared stories she heard from others who witnessed violence, beatings and even death during their time at residential schools. The effects were crippling and continue to ripple through today’s generation as some families struggle with parenting.

“There’s so many children in care and our families struggle to get them back,” said Martin.

She pointed out that Indigenous people have the highest number of children in care in proportion to the rest of the population. Children and families, she said, need to be the top priority when it comes to reconciliation.

Julia Hunter is a foster parent recruiter for Usma. She said they have 120 families caring for children made up of Nuu-chah-nulth families, kin, and non-Indigenous families.

Usma, she said, has developed resources designed to help children in care stay connected to their culture and extended families.

She said she’s heard the opinion that the foster care system in Canada has become the new residential school.

“We’re trying not to be that,” she said, adding that Usma is also working on prevention.

Michelle Dick of Usma brought up intergenerational trauma that stems from the residential school system. She noted that Ahousaht is building their own healing centers, adding that it is a step in the right direction.

“We need to live our way, to take care of our own,” said Linda Martin of Tla-o-qui-aht. “I think what’s lost is the way we used to raise our children.”

Linda suggested Usma host an elders’ group to share their knowledge about family and raising children. Samuel said he would like to be an elder resource person, to take children in care out to events and sports, much like a grandparent would.

Monthly ?aps ciik cha chum Hiy Ap meetings have resumed, and the United Church will welcome anyone that wishes to attend, including people who may have gone to Catholic Indian residential schools.

“We hope to work on a vision statement sometime in the future, figuring out what reconciliation is and what we need to do to be a part of that,” Heatherington said.

The next meeting is scheduled for June 10th, beginning 9:30 a.m. at the United Church in Port Alberni. 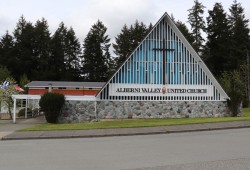