In response to a blockade that was recently built on a logging road off of Carmanah Main, a letter was delivered to activists on June 23 by Ditidaht Chief Councillor Brian Tate, who was supported by the First Nation’s Tyee Ha’wilth Satiixub (Paul Tate), and fellow elected chiefs Robert Dennis of Huu-ay-aht, and Jeff Jones of Pacheedaht. (Denise Titian photos)

Ditidaht First Nation delivered a message to protestors manning an encampment on a forestry road just outside of the Nitinaht Lake community: “Clean up your mess and go back to where you came from.”

The letter was delivered on June 23 by Chief Councillor Brian Tate, who was supported by DFN Tyee Ha’wilth Satiixub (Paul Tate), and his fellow elected chiefs Robert Dennis of Huu-ay-aht, and Jeff Jones of Pacheedaht. A convoy of pickup trucks filled with members of each nation followed, including C̕awak ʔqin witwak guardians, C̕awak ʔqin forestry personnel, Sarah Fraser, B.C.’s assistant deputy minister of Rural Opportunities, Tenures and Engineering, as well as members of the media and the RCMP.

Chief Tate said he noticed demonstrators were coming back to the encampment a couple weeks earlier. They had mostly abandoned the site over the winter.

“None of them came to talk to us,” said Tate. “There is no respect for our Ha’wiih, our leaders or for our people.”

The road they occupy is a spur off Carmanah Main, which now has a set of barricades constructed across the road. The first is made of wood and brambles followed by a more significant structure that appears to be walls made of wood and tarp.

Blockades began in August 2020, as members of the Rainforest Flying Squad feared road construction would threaten the Fairy Creek valley near Port Renfrew, one of the few watersheds on Vancouver Island that remains untouched by industrial logging. Through 2021 activists continued occupying encampments on southern Vancouver Island logging roads, forcing First Nations with forestry interests to take measures to control conduct in their territories.

On May 10, 2021 the Huu-ay-aht set up a check point at the entrance to their ḥahuułi to control activity, informing visitors that they must follow the First Nation’s three sacred principles: ʔiisaak (Utmost Respect), ʔuuʔałuk (Taking Care of), and Hišuk ma c̕awak (Everything is Connected).

On June 9, 2021 the province agreed to a notice from the Pacheedaht, Ditidaht and Huu-ay-aht for a two-year deferral on old-growth logging in the Fairy Creek watershed and Central Walbran, allowing the First Nations to undertake stewardship management plans with their citizens.

Despite the logging deferral, activists said in the spring of 2021 that they fear large-scale logging could still occur in old-growth forest directly adjacent to Fairy Creek and in parts of the Central Walbran not included in the deferral.

The current encampment is located within TFL 44, which is managed by C̕awak ʔqin Forestry, a partnership between Huu-ay-aht’s Huumiis Ventures LP and Western Forest Products.

C̕awak ʔqin Forestry states that it is committed to respectful engagement with the 14 First Nations that have portions of their traditional territories within the boundaries of TFL 44. Those nations are Ahousaht, Cowichan Tribes, Ditidaht, Halalt, Hupacasath, Huu-ay-aht, Lyackson, Pacheedaht, Penelakut, Stx’uminus, Tseshaht, Ts’umbaa-asatx, Uchucklesaht and Yuułuʔiłʔatḥ.

RCMP have gone into the encampments to make arrests but the activists dig in, bringing in more people.

“There are other ways to protest peacefully, what they’re doing here is combative and conflictive,” said Tate.

Harry Bossault of Huu-ay-aht is a witwak guardian, a position that started in January 2022. He is part of a crew that patrols the approximately 150 hectares of land that includes portions of territories of Uchucklesaht, Pacheedaht, Tseshaht, Huu-ay-aht, Ditidaht and Hupacasath.

He and Bryce Mercredi, witwak guardian supervisor, were there to help deliver the eviction notice on June 23. Part of their job is to monitor the people at the encampment.

“We are forced to record during any interaction at the encampment to avoid being accused of physical violence,” said Harry Brossault, speaking to the hostilities that have grown between the activists and authorities.

“They tell us this is not Ditidaht territory, it’s shared territory,” he added.

On June 23, activists around the encampment could be seen near the barricades they built. According to Tate, there were many more hidden in the forest beyond the barricades, he didn’t know how many. All of them had most of their skin covered, dressed in all black clothing or camouflage. They wore hats, masks, long sleeves and gloves and all were filming with cameras or cell phones as the chiefs approached.

A group of about six protestors came out to meet with the chiefs while at least two others clad in black stood by the barricade watching.

Cyril Edgar chanted a ci’qaa as the Ha’wihh, elected chiefs and witwak approached the activists, who came out to meet them at the first barrier across the road.

Reading from a prepared statement, Chief Tate said, “By entering into our ḥahuułi you must acknowledge and respect our Indigenous governance and stewardship responsibilities to decide what is best for our lands, our waters, our resources, and the wellbeing of present and future generations of Ditidaht, Huu-ay-aht and Pacheedaht people.”

He went on to say that all visitors to their ḥahuułi must not interfere with forest operations authorized by the BC Government under the Forest Act.

“Boundaries have been crossed and disrespect has been shown,” said Tate to the activists.

He told them that nobody is cutting the last trees down.

“We kindly ask you to clean up your mess and leave quietly,” he told them.

Chief Robert Dennis pointed out that Ditidaht brought their Tyee Ha’wilth, the highest form of governance on this land.

“We have the inherent right to govern and it’s being exercised today by our highest form of government,” said Dennis, asking them to respect that.

“Ditidaht First Nation has Pacheedaht support, they politely ask you to pack up and leave – go back to your own territory or wherever you are from,” added Chief Jeff Jones.

Jones went on to say that the three nations stand together.

“The blockaders roaming around our territories is not supported by our nations,” he added.

While the chiefs have the support of their people and even neighboring non-Indigenous communities, some of their members are concerned about the scale of logging that might take place.

“I feel like the trees have spirits, and that they want to cut them down, that makes me said,” said a Ditidaht elder and weaver, who uses cedar bark in her work.

Chief Tate acknowledged the concern, stating forestry plans are being made by the First Nations during the two-year deferral process. Those plans include the protection of at least some stands of old growth forest - 96 per cent of old growth forest retention within TFL 44, according to C̕awak ʔqin Forestry’s fact sheet.

“We have lots of good cedar bark and deer hunting…some of the best of it is right up that road, but they have it blocked off to our members,” said Tate.

After asking them again to clean up their mess and leave, one woman defended her position by saying that they have spoken to some of Ditidaht’s elders, “and they want us here,” she said.

She didn’t specify which elders were spoken to, but she accused Tate of not consulting with them.

“Some people in your territory don’t agree with you – they don’t disrespect you,” he countered.

A woman calling herself Kagagi then asked if sitting together to talk about it over coffee is an option.

At the end of the confrontation, it appeared that there was no willingness amongst the activists to leave the blockade.

This did not surprise Tate.

“For now,” he said, “the witwak will monitor the encampment daily, observing, recording and reporting.”

If the illegal encampment is not removed, Tate said plans will be made to deal with the matter. 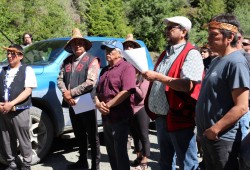 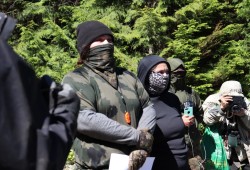 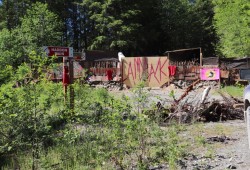 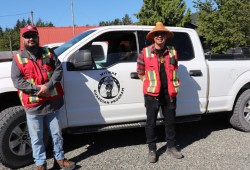